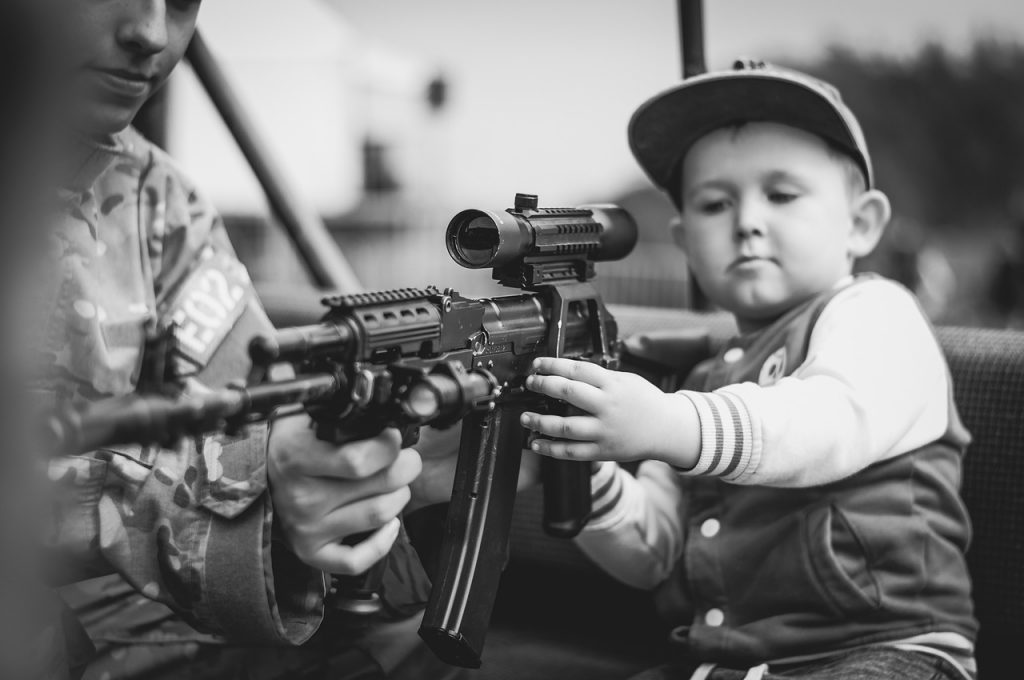 One must not go out [on Shabbat] with a sword, nor with a bow, nor with a triangular shield, nor with a round one, nor with a spear; if he does so he is liable for a sin-offering. R. Eliezer says they are ornaments to him [and thus permitted to be worn on Shabbat], but the sages say they are nothing but a reproach, for it is written [Isaiah 2:4]: “They shall beat their swords into ploughshares and their spears into pruning-knives; nation shall not lift up sword against nation, neither shall they learn war any more.” – Talmud, Shabbat 63a

I spent most of last Wednesday renewing my gun license. Contrary to what many in the U.S. believe, owning a firearm in Israel is neither common nor easy. Applying for a license is a grueling process, often taking months of security checks and training courses. Keeping that license requires an investment of time, effort, and money.

And so, on Wednesday morning I drove into the nearest town to get the necessary forms signed by my family doctor, who certified that I’m not taking any medication that might impair my alertness, that I have no history of psychological disorders, and that I’m more or less in my right mind—at least most of the time.

And then it was off to the shooting range. Together with 15 others I stood in line for half an hour to have my designated self-defense weapon examined, tested for any malfunctions that would endanger myself or passersby. The serial number was matched with the paperwork to make sure the weapon was legally mine and had not been put on any watch lists. Another 40-minute wait (part of it spent in the Sukkah outside the range schmoozing with a Polish veteran of 4 wars) and we were ushered into the range for our training session.

The session was conducted by someone whom I knew as an instructor back in my days in the Police Sniper Unit. He went over changes to the laws of owning a firearm: “If your weapon is stolen from your house and you cannot prove that a safe was broken open to get at the weapon, then you are a criminal and may do jail time.” And if we ever have to use a weapon in self-defense? “You had better be certain that you had no other recourse, that you did what you could to warn the attacker, and that had you not taken action, at least one innocent life could have been lost. And you may risk jail time.”

We spent about an hour at practice, refreshing our ability to deal with safety issues and malfunctions, honing our skills. One by one, we were certified as competent and sent out to collect our paperwork, duly stamped and fed into the computer, from which it would go into some government database. The process took up most of the day.

I thought of all this when I read of yet another (reportedly, the 265th this year) mass shooting in the United States—this time at a small community college in Oregon. Four firearms…. An attention-seeking, f-cked up excuse for a human being walked into a classroom with four firearms. There is something seriously wrong about a system where a disturbed young man can acquire deadly weapons as easily as buying a new laptop.

I live in a country with wars raging on all sides, with failed states collapsing into a primordial stew of hatred and nihilism an hour’s drive north of me, with suicidal regimes seeking nuclear weapons in order to carry out their expressed goals of obliterating me, my family, and everyone with whom I interact on a daily basis. But for all this, I don’t feel as if I’m living in a war zone. We know about death and we know about weapons of war, but we don’t fetishize them.

And the U.S.? A country bounded by friendly regimes and by neutral water… Apparently a nation lacking natural enemies may simply become its own enemy.