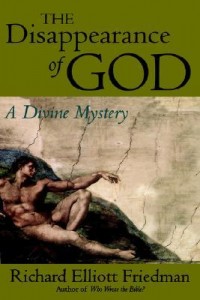 Many may know Richard Elliot Friedman for his books on Biblical textual research, but he has also written a very useful, and very wise commentary on the Torah. However, this latest book is both scholarly and mystical in scope.

The mystery of Divine Withdrawal

The Disappearance of God details the gradual receding of the divine presence in the Biblical writings—from the unquestioned companion and teacher of the Patriarchs, to the distant but still-present redeemer in Exodus, to the absent deity of Esther. Each diminishment of the perceived Divine presence is another stage of human development. But how is it, asks Friedman, that the numerous biblical authors, in the complete absence of any coordination between them, managed to tell the same story of gradual Divine withdrawal from human history?

The answer, he posits, is that the Bible itself is a reflection of a universal story of human development, of the withdrawal from the Sacred—and frightening—origin of being into a realm that is safer, more human, and more understandable, but which draws its meaning from its Divine origin. We remember the closeness to the Holy. It’s encoded in our very being. But we have had to leave it behind and embark on our own journey in order to be truly human.

What the recurrence of the phrase [the hiding of the face] indicates is that the diminishing apparent presence of God was not only a literary-historical development in biblical narrative, but rather it was felt, consciously, acutely, by sensitive persons in the biblical world. In every occurrence the phrase reflects a condition in which the deity is understood to exist but not be available to humans, giving no visible signs of presence, leaving a human community to face their troubles on their own. The prophetic books do not so much add proof to the development; rather they make it deeper, more vivid. They convey the human, emotional response to the disappearance of God.

The human awareness of the absence of divinity brings with it a crisis of faith. Friedman cites the writings of Nietzche and Dostoevsky as examples of the crisis as it unfolded in modern times. Both authors connect the disappearance of God (or the absence of God) with madness.

It is understandable that these two men who were so deeply concerned with God and with madness should have perceived these two realms to overlap. God represents order, especially in Western religious tradition. God gives shape, gives laws. Recall that in the Bible, creation is the divine imposition of order over chaos. In Genesis, initially there is only water, in a shapeless, undifferentiated abyss, described as “unformed and void” (Hebrew tohu vavohu). Creation is a process of distinctions, or divisions, which turn this unformed material into a universe of things and beings: distinctions between light and dark, between dry areas and waters, between the waters above the firmament and those below, between sky and earth, between sun, moon, and stars, et cetera.

As Friedman notes, the opposite of order is not disorder, but madness. Chaos, translated into human perception, is the absence of distinctions, where all values have equal value.

In each case, creation involves the deity’s separating a substance and then giving it a name. With time as with space, the diety makes distinctions, marking days, months, years, seasons. That is creation. With God, things have distinguishable existence in time and space. Without God, “all is permitted.” Somehow madness involves, in some degree, a return to chaos. Distinctions break down, all is permitted.

Interestingly, Friedman never makes the connection to the Four who entered the Pardes, a story of mystical revelation and madness set out in the Talmud (Chagiga 14b):

Ben Azzai went in, saw what was there, and died.

Ben Zoma went in, saw what was there, and went mad.

Acher went in, saw what was there, and uprooted the shoots (left the life of Torah).

Rabbi Akiva entered in peace and left in peace.

In a beautiful and poignant article about her brother’s death, Jennifer Tzivia MacLeod notes that the dividing line between sanity and insanity is a matter of recognizing distinctions, some of which are arbitrary and meaningless apart from the meaning we given them as markers of sanity.

She cites Ben Zoma’s own explanation of what he had seen in the Pardes:

“I was contemplating the mysteries of creation. I learned that between the upper waters and the lower waters there are but three finger-breadths.”

Hearing this, his colleague told his students, “Ben Zoma is gone.”

From the Divine point of view, there really is no distinction between the upper waters—Shamayim—and the lower waters—Mayim. But for us, the ability to acknowledge the distinctions is the measure of our adaptation to physical reality. MacLeod writes:

Sometimes…we need these arbitrary distinctions in the world; toeing this line is what marks us as “sane” in ordinary society.

When the distinctions begin to blur, as they did for Ben Zoma, when the upper waters start to seem like they’re the same as the lower waters – or at least, only three finger-breadths apart – then our sanity is in trouble.

This capacity for discernment is what we lose in the abandonment of the world to chaos. It is a perceptual turning back of the clock to a time before “the Spirit of God hovered over the waters”.

Hester Panim and the descent into chaos

One of the more ominous implications of the “madness” accompanying  the declining perception of the divine was how it set the stage for the Shoah. Friedman writes that our voluntary acceptance of God’s law provides a measure of security. But more than that, it anchors our moral being in something greater than ourselves, and thus serves as a bulwark against moral relativism.

[The absence of the Divine] leaves an arbitrariness, an ambiguity, concerning which even Nietzsche himself forewarned. When he said that the greatest danger lurking is madness, the full context oft that remark was one of madness as the opposite of faith:

“The greatest danger that always hovered over humanity and still hovers over it is the eruption of madness—which means the eruption of arbitrariness in feeling, seeing, and hearing, the enjoyment of the mind’s lack of discipline, the joy in human unreason. Not truth and certainty are the opposites of the world of the madman, but the universality and the universal binding force of a faith; in sum, the non-arbitrary character of judgments.”(The Gay Science, Book 2, section 76.)”

Nietzsche warning against arbitrariness and lack of discipline carries an implicit warning against hubris—the elevation of human reason to a position of infallibility. The moral relativism that Nietzsche foresaw was to bear fruit in the greatest cataclysm that mankind had yet seen:

Nearly a hundred years later, while some of the death-of-God theologians concentrated on the liberating aspect of the doctrine, others were intensely aware of the psychologically troubling side of what they were pronouncing. Altizer wrote of “… a new chaos, a new meaninglessness brought on by the disappearance of an absolute or transcendent ground, the very nihilism foreseen by Nietzsche as the next stage of history.”(Altizer, The Gospel of Christian Atheism, p. 22.) And he added, “No honest contemporary seeker can ever lose sight of the very real possibility that the willing of the death of God is the way to madness [and] dehumanization…”

It would appear that the “death of God” was an all-or-nothing proposition. The continued existence of people for whom God was not dead presented a problem for those who were certain that God was dead. Their answer was to exterminate all ambassadors of God in their midst. They would do their part to bring all back to chaos, to erase the distinctions between light and dark, good and evil. They would, in short, do what they could to bring about the death of God. Dehumanization, indeed.

If the Disappearance of God is a stage of our growth as a species, it is to be hoped that we will outgrow it, and soon!