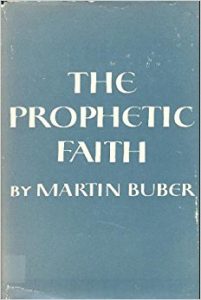 Among the books I’ll be using for the discussions in Havrutah with a One-Eyed Cat is Martin Buber’s The Prophetic Faith. Buber speaks of the relationship between prophecy and free choice:

The Israelite prophet utters his words, directing them into an actual and definite situation. Hardly ever does he foretell a plainly certain future. YHVH does not deliver into his hand a completed book of fate with all future events written in it, calling upon him to open it in the presence of his hearers. It was something of this kind the “false prophets” pretended, as when they stood up against Michaiah (v. 11ff) and prophesied to the king, “Go up and prosper!” Their main “falsity” lay not in the fact that they prophesy salvation, but that what they prophesy is not dependent on question and alternative. This attitude is closer to the divination of the heathen than to true Israelite prophecy. The true prophet does not announce an immutable decree. He speaks into the power of decision lying in the moment, and in such a way that his message of disaster just touches this power. The unformulated primal theological Principle of the Garden of Eden story about the divine-human relationship, namely that created man has been provided by the Creator’s breath with real power of decision and so is able actually to oppose YHVH’s commanding will—this mysterious article of faith rises now to awfully practical force. The divine demand for human decision is shown here at the height of its seriousness. The power and ability are given to every man at any definite moment really to take his choice, and by this he shares in deciding about the fate of the moment after this, and this sharing of his occurs in a sphere of possibility which cannot be figured either in manner or scale. It is to this personal decision of man with its part in the power of fate-deciding that the prophetic announcement of disaster calls. The alternative standing behind it is not taken up into it only so can the prophet’s speech touch the innermost soul, and also be able to evoke the extreme act: the turning to God. (Buber, p. 103-104)

Buber’s take on free will ties in with one of the modern theories of how free will is possible at all—the need for chaos at the heart of physical existence. Uncertainty is a prerequisite for human free will. Sensitivity to initial conditions entails a limit to predictability, the results of which “cannot be figured either in manner or scale.”

This is the true significance of the Halakhic rulings in those cases where indeterminacy is most evident—”Beyn HaShmashot.” The grey areas are necessary for our existence. The corollary is that evil too, is necessary for our free will—not in the naive sense of needing dark in order to appreciate the light, but in the existential sense. It isn’t just that, without the possibility of wrong, we would not appreciate the right. Rather, without the possibility of wrong, there would be no possibilities at all. Indeterminism means that sometimes things will go wrong.

Free will, whether real or an illusion, is founded in uncertainty. The Talmud pictures this as being true of God as well:

“A blessing can come only from that which is hidden from the eyes.” (Ta’anit 8b)

A blessing can only be asked for things not yet known—the grain unmeasured in the silo, the seed yet to sprout, the change uncounted in one’s pocket.

The Talmud not only argues for the human dimension in Torah, it embodies the very thing it strives to build. The fallibility of knowledge is the very center-piece of the Talmud. In a sense, the Talmudic methodology has a lot in common with what we’ve come to think of as “the scientific method”. The Talmud, like scientific inquiry, aims to approximate truth, or to reach a “practical truth”. See Rashi’s explanation of the enigmatic phrase: These and those are the words of the Living God”:

When two Amoraim disagree with each other about the law … there is no untruth there, Each of them justifies his opinion. One gives a reason to permit, the other , reason to forbid. One compares the case before him to one precedent; the other compares it to something different. It is possible to say, “both speak the words of the living God.” At times one reason is valid; at other times, another reason. For reasons change in the wake of even only small changes in the situation. [emphasis added.] (Rashi on T.B., K’tubot 57a, S.V. Ma Kamashma Lan.]

Note that sensitivity to initial conditions is one of the hallmarks of a chaotic system. It is no coincident that the phrase “Living God” is repeated here. This kind of indeterminacy, or autonomy, is characteristic of living creatures. It is absent, at least on the macroscopic level, in inanimate mater.

Thus Buber notes that only the false prophet foretells the future with certainty. This is a profound statement of the nature of time and causality. No true statement can be made about the future with certainty, for in the act of pursuing certainty, we alter the outcome of all future moments, and those moments in turn lead to more choices, until the whole cascading chain of consequences runs far beyond our ability to predict. The only power in our hands, and it is an overwhelmingly serious one, is the power to choose in this moment! Each minuscule decision brings its own cascading reality with it. And so individuals, civilizations, and species all hang by the thread of a decision by one person. And that one person is each of us.