You are here: Home / Memory & History / Chade: In memory of a wild Canaan dog who made himself at home in our hearts 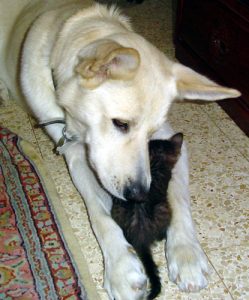 The first sign of his presence was a large canine paw print in the silt of the little fish pond. Crushed water plants and puzzled fish.

Soon I got used to finding the back door open, the trash can spilled onto the kitchen floor, and empty food containers scattered around the garden. All of them licked meticulously clean.

When I first heard his deep bark, I worried for the safety of the cats, who had never known a dog for good or ill. But no, he had suborned them all long before. They were in on his depredations. Partners in crime, they showed him where the cat food was kept. Together, they pried opened the drawer and feasted like kings.

It was days, possibly weeks, before I ever caught sight of him — a whitish beige streak of lupine grace clearing the low wall at the back of the garden, reaching for the wide open spaces whence he’d come.

And so began the game — we would have to domesticate one another. I put out leftovers. He stayed a bit longer in the yard, daring me to come closer. I sat in silence on the garden bench. He lay down ten meters away, eyeing me warily. I held out a bit of kabanos to him. He stalked it like a cat, snatched it from my fingers and leaped away. But the next day, he lay down within touching distance. I touched, wondering if I would lose an arm, ran my hand through his ruff. I had been domesticated.

He refused to leave my side for days. From room to room, up to the village center to collect the mail and back, he was always right beside me. He accidentally locked himself in the bathroom and chewed a wolf-shaped hole in the door. Doorknobs and window latches acquired teeth marks as he learned how things worked. 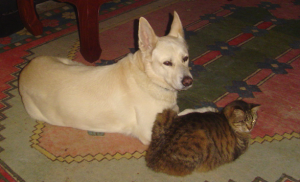 We called him “Chade” after the wily white-haired spymaster of Assassin’s Apprentice. He never gave us his real name. Instead, he gave us a friendship founded on emotional honesty. His look of amazed gratitude — as if he couldn’t believe his luck — each time I filled his food bowl taught me a lot about prayer. His attitude toward kittens, one in particular, taught me a lot about patience. And gentleness. And love.

He had no training as an obedience dog. He was a Canaan dog, after all. But he obeyed the dictates of the heart with unflinching devotion.

He had no training as a healer, and yet he was the one who could get the cats to sit still and submit to the lancing of an abscess or a vaccine. Once, upon deciding that small animals should not be caged, he liberated our daughter’s guinea pigs, and was later found cradling one of them between his paws and licking the critter for all he was worth.

He had no training as a therapy dog, and yet, he always knew. He was always there, waiting for the moment to step in, to banish the memory of pain with the reality of kindness.

He had no training in search and rescue, and yet no matter how far back in time I went, he always found me and brought me home. His hold on the present was my anchor when the walls of time crumbled, revealing their dead. Chade saw it all, and traded his warm presence for the absent tears, his head resting on my lap, his warm brown eyes unflinchingly holding my gaze.

If I have any part of Olam HaBa, may it have ample room for that loving gaze, the acceptance of one who could have chosen anyone, and chose our home to fill with his presence.

Go in peace, our gentle wolf. May your memory be a blessing to us. 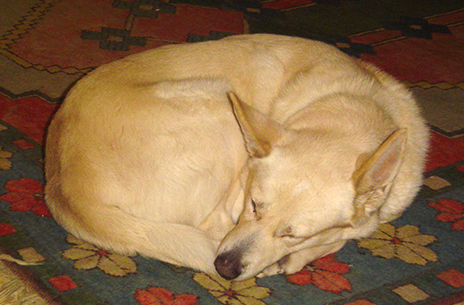