You are here: Home / Halakhic Process / Correcting the Torah reader: mitzvot in collision

A revised version of this article appeared in Haaretz Jewish World 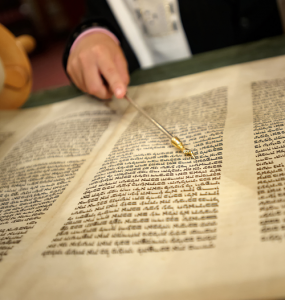 Imagine that you are reading the Torah, for the first time in your life, in a packed synagogue. You’re nervous and acutely aware of the responsibility resting on you. After all: hearing the Torah read correctly, with the proper accents and punctuation, is a communal obligation and it’s your job to make sure all present can fulfill that obligation. Now imagine that you make a mistake. Someone calls out the correct reading. You read it over again, correcting the mistake. But now you’re even more nervous. You make another mistake, which is followed by three or four voices from the crowd calling out the correct reading. By now, you’re lucky if you can get through a few lines without being pounced on by a dozen voices. How soon do you think you’ll want to try again?

This is the situation that a recent article in a Halakhic Anthology seeks to prevent. In an article in Tehumin, Rabbi Jonathan Raziel of Ma’aleh Adumim discusses the question of whether the listeners in synagogue should correct the reader, even when this could embarrass the reader. R’ Raziel’s answer: Not embarrassing the reader takes precedence over hearing the Torah read correctly.

This kind of question is typical of the dilemmas faced by Halakhah: the need to preserve core values while providing for the actualities of life in an imperfect world. Normally, when a legal system is faced with two contrasting values, the solution is fairly arbitrary choice between them based on current realities. Halakhah has what seems to be an advantage, in that the injunctions of the written Torah take precedence over those of the oral Torah. However, this is not always a clear-cut matter; it is the sages of every generation who determine the meaning of the written Torah.

And so it is with the current ruling. The source of the written Torah’s injunction against embarrassing one’s fellow is implicit in the commandment not to cause distress to another (VaYikra 25:14). The Talmud (Bava Metzia 58b) extends this to causing distress to another with words.

The specific prohibition against embarrassing one’s fellow rests on the verse: “You shall surely rebuke your colleague.” (VaYikra 19:17) However, the end of the verse: “and you shall not bear iniquity because of him” is not interpreted in what might seem the simpler meaning—as the natural consequence of the first half of the verse. Rather, it is seen as a warning not to overstep the bounds of rebuke. Together, the two halves of the verse are taken to mean: rebuke, yes; but not to the point where you fulfill one commandment through the transgression of another.

R’ Raziel argues that while the public reading of the Torah is d’rabbanan (a rabbinic law), the law against embarrassing another in public is d’oraita (a law from the written Torah) and so takes precedence.

Indeed, the sages of the Talmud considered embarrassing another in public to be a serious crime, akin to bloodshed (Bava Metzia 58b), and the Rambam includes embarrassing ones fellow as among the acts that cost a person his or her place in the world to come. This is not so much due to the nature of the act, but its effect on the character of the person who habitually commits such acts. The disregard for another’s dignity reflects a lack of awareness of the worth of the other person, and this lack has spiritual consequences.

It is when we see someone doing something that we feel to be wrong that we are least able to see the other person as deserving of consideration. The Talmud relates (Baba Metzia 30b) that one of the reasons for the destruction of Jerusalem and the loss of sovereignty was that “they ruled in accordance with the strict letter of the law.” At first glance, this seems surprising: shouldn’t meticulous observance be a good thing?

The trouble is that in the real world, inhabited by real people in all their complexity, one can’t be meticulous about one commandment without being lax about others.  The person who refuses to eat at her parent’s house because they don’t keep kosher in the same way she does may be meticulous about kashrut, but lax in respecting her parents; the man who won’t allow a woman to sit next to him on a bus may be observing to the letter his conception of modesty, but may be lax on not embarrassing a fellow human being.  And what can we say about women being shouted down—and even arrested—for reading Torah at the Kotel?

Thus, the implicit criticism of the Talmud is that people during the last days of the Second Temple were meticulous about ritual observances at the expense of the more important—but more difficult—observances between man and man. Indeed, a story in the Talmud (Gittin 55–56) has it that the public humiliation of one man by another ultimately led to a charge of treason being leveled by the Romans at the Jews of Jerusalem. Words can kill.

Halakhah is a compromise between ideals and real life situations. The truly great halakhic decisors are those who manage this compromise in ways that not only bring more kindness into the world, but also show others how to do the same. Sadly, it is much easier to practice the easiest—and most external—mitzvot (kashrut, skirt length, etc.) than the much harder mitzvot bein adam l’havaro. But that too is a choice.

In our day, we hear far too many stories of judges “ruling in accordance with the letter of the law” at the expense of the dignity of others. It’s refreshing to see a ruling such at that outlined by R’ Raziel, which urges sensitivity toward others, even in a situation where meticulousness is integral to the observance of a mitzvah.