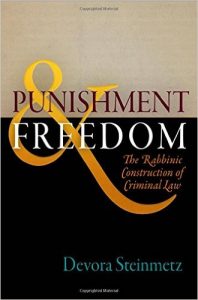 In the course of my research for my next book, Havruta with a One-Eyed Cat, I’m reading a variety of books on topics ranging from Talmud to mathematical logic. Here, I’ll record thoughts that come to me along the way. Some of these musings may well make it into the book, depending on whether Pixel takes an interest (a sure way of getting a cat to take an interest in a book is to try to read it when she’s in the room!).

Following are some musings on Devora Steinmetz’s Punishment & Freedom, a veritable treasure of Halakhic insight.

Her main point is that Halakhah is positivist, that is, based purely on the acceptance of commandment, as opposed to the Noachide laws, for which the Talmud offers two different derivations, both of which correspond to some version of “natural law”. In the excerpt below, Steinmetz shows how the crime of murder is set apart from other Sinnaitic laws as the one place where Sinnaitic Law and natural law meet.

[The punishment of death] Hereg…is uniquely assigned by the Rabbis to the act of murder. Moreover…this particular form of execution, death by sword, is the way people kill (ed. as opposed to death by natural cause). Killing by sword is a social act: the assignment of this form of execution to the crime of murder both underscores the reciprocal nature of the punishment for a murderer and emphasizes that that punishment is in the hands of human society. Execution by sword, like the assignment of the role of executioner to the go’el haddam (ed. avenger of blood), suggests that the court incorporates rather than supersedes the social response to murder. While it is the court’s job to regulate this response, to acquit the inadvertent homicide and to convict the intentional murderer, the judicial response to murder, at the end of the process, reverts back to the primordial notion that “he who spills the blood of a human being, by a human being shall his blood be spilled” (Gen. 9: 6).

The notion that the Torah comes to “regulate” the natural response is a very fruitful idea, in particular when dealing with issues where our moral sense recoils. For example, the Sotah (the woman suspected by her husband of adultery), the Yaffat Toar (the beautiful woman taken in war), the Ben Sorer u’More (the rebellious son)… In all of these cases, the Torah seems to be saying: “You want revenge? You want to slake your lust? Your need to control? Sure, but not so fast! There are procedures that must be satisfied first!”

And in the course of fulfilling the required bureaucratic requirements, tempers cool, lust subsides, sanity prevails.

Do we still need such procedures? A look at the news in our region attests to the adage that a stream returns to its natural course. Just as 70 years ago Europe proved to us that the veneer of civilization is thin indeed, the Middle East seems fated to periods of violent upheaval.

Yes, we still need legal rulings to channel human barbarism and cruelty into the fragile sanity of bureaucratic procedure. And yes, we still require such procedures to be backed by Divine sanction. We need to know that in following the saner course, we aren’t simply giving in to the temptings of our own cowardice or—dare we say it—of a wimpy compassion. Rather, we have the higher order of heaven and earth at our back when we choose mercy over cruelty, forgiveness over revenge. I am convinced that if evolution itself could be given a voice, it would applaud such choices in the voice of the Torah itself.

Perhaps it already has!