You are here: Home / Book Reviews / Drinking Coffee with the Rambam: A review of Judaism Reclaimed 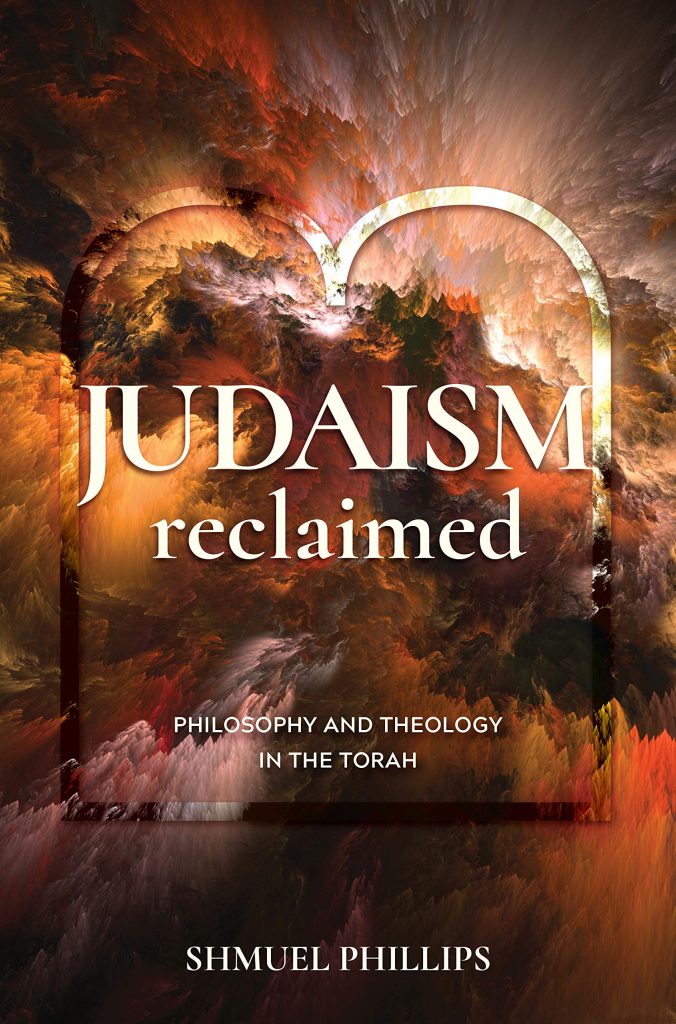 As we emerge from a very strange and isolated year, it feels odd to think of actually sitting down at a coffee shop with other people. On the other hand, with most of the population in Israel vaccinated…

“Have you had your shots?” you ask your friends as you pull out a chair. Awkward! Maybe I’ll wait another week or two before making that coffee date.

But throughout this rather bizarre period, I’ve had the odd feeling that I’ve been sitting and drinking coffee with none other than the Rambam! That’s right, Maimonides himself, Torah scholar, philosopher, and medical practitioner to kings. That’s because of a remarkable book called Judaism Reclaimed by Shmuel Phillips, which has furnished me with food for thought during this time. Based loosely on Parashat Hashavua (the weekly Torah reading), the book is actually a philosophical examination of Jewish thought and theology.

It’s a bit hard to put a label on this particular book, simply because it dips into so many different topics. Epistemology, sociology, theology and a host of other areas of thought come into play. The common denominator is that each of these topics is viewed though the lens of the Rambam’s thought. Or, perhaps more accurately, through the Rambam’s attitudes towards thought. How might the Rambam answer Kant’s claim that we can never possess objective knowledge? What would the Rambam do with the modern scientific challenges to naive belief? And how might he answer the challenges of biblical criticism? In short, reading Judaism Reclaimed gave me a sense of sitting down at a table in Four Dimensional coffee house and picking the Rambam’s brain on a wide range of topics.

I will say at the outset that the author is coming from a different point on the Jewish religious spectrum than I am, at least from a doctrinal point of view. For this reason, I appreciate the fact that for the most part, he maintains a fairly neutral stance on some of the thornier issues of Judaism. In presenting the contrasting interpretations of Rambam and other heavyweight Jewish thinkers, such Rabbi Yehuda Halevy and Rabbi Samson Raphael Hirsch, he offers a framework for thinking about the larger questions, rather than definitive answers.

The main thrust of the book is responding to the challenges of modern developments to the orthodox Jewish worldview. Toward the beginning of the book, Rav Phillips writes:

I have particularly focused on understanding and developing the thoughts fo Rambam and Rav Hirsch, since each of these giants took up the challenge of responding openly and rationally to the challenges faced by Orthodox Judaism in their respective eras. I also believe that their willingness to embrace the disciplines of logic and science, seeking to avoid clashes between them and the Torah without reducing the significance of either, will strike a common chord with those who attempt to understand the Torah’s timeless truths within the context of the modern era.

Free will and the limits of knowledge

While it’s impossible to adequately examine every aspect of Judaism Reclaimed, one topic that’s dear to my heart surfaces more than once: the interaction between free will and the limits of human knowledge. Rav Phillips mentions the Rambam’s attempt to reconcile God’s foreknowledge of events with humankind’s free will (Hilkhot T’shuvah 5.5). Both notions are crucial to the Rambam’s thinking, and yet they would appear to be inconsistent with one another. After all, if God already knows what I am going to do, in what way am I free to make a different choice?

The Rambam reconciles the contradiction by falling back on the difference between human and divine knowledge:

As explained in the second chapter of Hilchot Yesodei HaTorah, The Holy One, blessed be He, does not know with a knowledge that is external from Him as do men, whose knowledge and selves are two [different entities]. Rather, He, may His name be praised, and His knowledge are one.

Human knowledge cannot comprehend this concept in its entirety for just as it is beyond the potential of man to comprehend and conceive the essential nature of the Creator, as [Exodus 33:20] states: “No man will perceive, Me and live,” so, too, it is beyond man’s potential to comprehend and conceive the Creator’s knowledge. This was the intent of the prophet’s [Isaiah 55:8] statements: “For My thoughts are not your thoughts, nor your ways, My ways.”

The Provençal commentator Rabbi Avraham ben David (know by his initials as the Ravad) took issue with the Rambam’s explanation—not because he thinks it’s wrong so much as that it raises more questions than it answers. Rather than confusing his readers and potentially leading them to doubt their faith, the Rambam should have left the matter to simple faith, says the Ravad.

Now, I well remember debating this question with Rav Ish-Shalom somewhere in my first year of learning with him. At the time, he was leaning toward the Ravad’s position: why bring up unanswerable questions and then provide lame answers to them? Why not leave well enough alone? My own view was—and remains—that it is the unanswerable questions that hold the greatest potential meaning. These are the questions that are akin to the “Goedel statement” in mathematics—the statement that is true within a logical system, but which cannot be proven by the tools available to that system. The existence or non-existence of God is another such question.

It would seem that the Rambam and Goedel would have had a lot to talk about in our Four Dimensional coffee house.

While Rav Phillips does a great job of interpreting—or perhaps re-interpreting—the Rambam in light of later developments, I found myself disagreeing with much of the worldview presented by these arguments. This isn’t the author’s fault, as I’ve had these same disagreements with the Rambam’s worldview in the past. If anything, the fact that I still disagreed even when seeing the Rambam’s ideas put in a more modern light simply means that Rav Phillips has done a good job of channeling the Rambam!

I also have to wonder whether the Rambam would still feel himself bound to Aristotle’s dichotomous worldview, were he to live in our age. As Rav Phillips points out, the Rambam was quite open to revising his thought when new evidence was brought to light. Would he have departed from Aristotelian dichotomies if he were introduced to chaos theory, evolutionary biology, and quantum indeterminacy?

Regardless of where you stand regarding whether Judaism has a theology, and what it may consist of, Judaism Reclaimed manages to provide thought-provoking insights on a wide range of topics. Along the way, the book does a very good job of introducing the thought of the Rambam, Samson Rafael Hirsch, Yehuda HaLevy and others. The book is scholarly, but the writing is eloquent and accessible, and ample footnotes offer further resources for those who want to go deeper. Judaism Reclaimed is sure to give rise to some lively discussions around the Shabbat table for years to come.