You are here: Home / Writing & Publishing / God and Politics in Esther: A political parable for our time 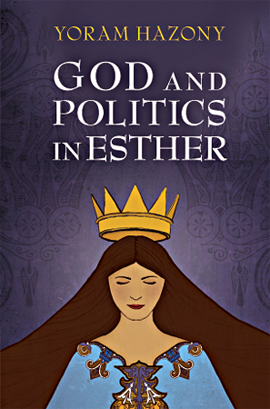 The Book of Esther is a story with something for everyone: court intrigue, sexual manipulation, and cunning plots foiled just in the nick of time. Depending on one’s point of view, the book can be read as a critique of monarchy, a mystical statement about the way God works in a secular world, or even a feminist manifesto.

But a new book, God and Politics in Esther by Yoram Hazony, aims to draw political lessons from this ancient story, some of which are harrowingly relevant to the increasingly polarized  American political landscape, and to other nations facing the politics of pessimism.

The Book of Esther, Hazony points out, provides a close look at how the ideal Persian monarchy should work: King Achashverosh is portrayed as a bumbling and insecure monarch, but one who faithfully follows Persian tradition by leaning on a host of advisers and court officials. In fact, no fewer than 18 advisers and councilors come into the story’s first two chapters. But after the revelation of a plot on his life by two of his security staff, Achashverosh becomes increasingly paranoid. He determines to do away with court politics and factional intrigue by appointing a single “enforcer” with the authority to lay down the law for the whole kingdom.

That enforcer is Haman, identified in the story as an Amalekite—a member of one of the many nations exiled by the Babylonians at the same time as the Jews. There is no love lost between Amelekites and Judeans, and it doesn’t take long for Haman to find a pretext to use his position to institute the slaughter of the nation’s Jewish population.

The excuse he needs is provided by Mordechai, a Jewish courtier, who refuses to bow before Haman as required by the new regulations.

But why does Mordechai act in such a way as to play into Haman’s hands? After all, there is no halachic restriction on bowing before a human ruler—as opposed to a religious symbol or idol. Not only does his refusal jeopardize his own position at court, it endangers all the Jews of Persia. Was this mere ego, or was something else involved?

The Talmud provides several possible rationales, but the one developed by Hazony is especially instructive for us today: by silencing the voices of dissent, the king had short-circuited the Persians’ traditional consensus-based decision-making process. He had thus destroyed any chance of reaching decisions that were truly of benefit to his people—for dissent is a necessary, if not a sufficient, condition for good policy-making.

Esther … speaks to its time by bringing the search for structural explanations to the classic Jewish problem of the difference between good and evil rulership. It claims that what causes the state, never too highly regarded in the biblical tradition, to be tolerable is its openness to competing views—as represented by the eighteen advisers surrounding Ahashverosh at the beginning of the tale. What makes the state bestial is the inclination of the powerful to shut out competing voices which should be heard if one is to make a rational judgement.

Absolute truth is unreachable by any single human mind; only in combination can these fragmented truths approach the greater divine truth. But the corollary is that anyone who relies on one opinion only—his own or someone else’s—and believes that he has the whole truth in his hands, is arrogating to himself a position of divine knowledge. This is why the Persian king’s appointment of Haman as his sole adviser constitutes not just bad government, but idolatry. Reliance on a false truth is one thing; believing that the false truth is absolute is far worse.

It is this transition from just government into megalomaniac idolatry that Mordechai is protesting in refusing to bow to Haman. A ruler who acts against the interests of his people is, according to the worldview of Israel’s prophets, acting against the will of God as well:

As Jeremiah said of Josiah, king of Judah: “Did he not…do justice and righteousness? Then it was well with him. He judged the cause of the poor and the needy. Then it was well. Is this not to know me? says the Eternal.” (Jeremiah 22: 13-16)  Thus all nations should be ruled for their well-being: The ruler who strives for this serves God himself, even if he is an idolater such as Darius. The ruler who does not rebels against God, raising his arbitrary desires above those of the King above.

What has all this got to do with us today?

While most countries operate by different rules than the Persian monarchy of 2,500 years ago, almost all governments depend on some form of consensus to maneuver between the competing interests of different factions. Any party that silences voices of dissent signals that it has no intention to value the interests of any faction but its own. Such a party’s decisions represent neither the will nor the interests of the broader public.

The current American political scene is the result of just such a breakdown of information diversity: the “echo chamber” effect has produced a starkly polarized electorate. Together with a mood of national pessimism, this phenomenon has fostered the rise of fringe politicians like Donald Trump.

A study by the MIT Media Lab rated Trump’s Twitter handle, @realDonaldTrump, as the top influencer in the U.S. election, well above mainstream media sources such as CNN or the New York Times. By skillfully manipulating both traditional and social media, Trump has managed to greatly reduce the role of the mainstream media as gatekeeper. Furthermore, the sheer outrageousness of his remarks—which often provoke furious debate—generates widespread media coverage. This massive free publicity makes those who agree with Trump’s message aware of his campaign and also, perhaps more importantly, of one another. The result has been the creation of a virtual community of supporters, strengthening Trump’s perceived support and pushing his supporters farther from traditional mainstream thinking.

While we usually think of societal fragmentation, political polarization, and authoritarianism as symptoms of state failure, they are also causes of state failure, due to a feedback loop between perception and reality. The unexpected rise of Donald Trump is a symptom of political and demographic insecurity, as the white middle class is in danger of losing its majority among the U.S. population. The fact that Trump seems intent on harnessing these fears bodes ill for the country’s famous reputation as a multi-ethnic “melting pot.” Like Haman in the Purim story, Trump’s road to rule is built on enflaming existing resentments and ethnic tensions; and like Haman, he doesn’t seem to care that his proposed solutions— draconian measures against minorities, for example—will tear the country apart.

The hidden miracle of human freedom

The rise of self-serving leaders threatens a breakdown of society, as factions, ethnicities, and religions, realizing that that there is no broad-based central authority to guarantee their interests, take matters into their own hands. We see the practical implications of such a breakdown in Syria and Iraq today: the rise of ISIS and other radical Islamist groups, the genocide of the Yazidis and other non-Muslims, and the deliberate destruction of all reminders of the region’s past. The same dangerous swing toward silencing—or simply ignoring—dissent jeopardizes Western governments, too. We see it in the rise of Marine Le Pen in France, and we will inevitably face it if Donald Trump makes it to the White House.

Once set in motion, this downward spiral can seem unstoppable.

And yet, here too, the Purim story may offer a valuable lesson. It’s a story of how concerned people, by making shrewd and courageous decisions, were able to put the ship of state back on course and preserve diversity of thought, belief, and practice. One of the lessons of Purim is that miracles these days are performed by individuals doing the right thing. In America, voter turnout (at least for midterm elections) has been on the decline in recent elections, a sign of civic pessimism and disengagement. If American moderates wish to protect their country from those who would subvert its true values, they must believe in their ability to make a difference. To paraphrase Mordechai: “Who knows whether it was just for such a time that you were given the vote?”