Introducing our first Guest Post, by Irris Makler. I will let Irris introduce herself. She has a fascinating story to tell, and I encourage you to visit her site to read more about this inspiring project.

Marysia Segan was a teenager during the war, and survived by living on false papers with her father and brother in Nazi occupied Poland.

“Dad would get up every morning look out the window and say ‘We’ve got an extra day,’ because they didn’t hunt for Jews during the day, only at night. So once the sun was up, we were safe for another 12 hours,” Marysia recalls.

The three of them survived the war. Forthright, energetic Marysia migrated to Australia aged 18 and transformed herself into a Melbourne society hostess. Her father followed years later, with his new wife and daughter, and Marysia met her new sister, Eve.

Marysia’s story brings up the questions of what you remember from a painful experience, what you block, and what you allow to emerge only after an extended period. She tried for decades to recall the name of a Polish family who sheltered her during the War. But that meant returning to the last day she’d seen her mother, which Marysia was not ready to do….

Maria Bierzynski, known to everyone as Marysia, was born was born in 1930, in a village near the beautiful medieval town of Krakow. She was the tomboy daughter of the village doctor, Henryk Bierzynski, and theirs was a secular Jewish household. They didn’t speak Yiddish; in fact, Marysia spoke Polish like a country girl. That accent and her “non-Jewish” looks helped to save her life.

By 1942, the Bierzynski family was on the run. They had to leave their village, where everyone knew the respected Jewish doctor. Marysia was twelve and her brother Jan sixteen when they moved with their parents, Regina and Henryk, to a nearby village, to wait for the false papers that would allow them to go into hiding.

They stayed in a guest-house, run by a Christian family. It took courage to accept and shelter Jews in your home in Nazi occupied Poland in 1942. Marysia was befriended by the two children closest to her in age, Janina and her brother Lech, known as Leshek. They swam in the river and climbed and rode horses—ordinary summer pleasures.

But this was no ordinary summer.

One sunny morning in July, when Marysia and her mother Regina were upstairs, they saw a convoy of German police cars racing up the driveway. Reacting quickly, Regina gave 12-year-old Marysia a backpack with some food and money and sent her out to the forest, saying, “Take the back door. Don’t return till they’ve gone and it’s safe.”

They would be the last words she would ever say to her daughter.

Regina stayed upstairs. One of the police checking their ID papers was a local man working for the Nazis. He recognised her surname, and knew her husband was the Jewish doctor from the next village.

Marysia’s brother Jan found her in the forest. Walking at night, the two of them looped back round to the village later to find their father.

Henryk decided to take his son and daughter to Warsaw, to try to ‘disappear’ in the large, anonymous capital city. With help from the Polish Resistance, all three survived.

They only learnt Regina’s fate when they returned to their village after the War. All nine of those arrested in the guest house had been shot at the police station that same day.

“Dad found out where Mum was buried, where the nine people had been buried after the execution. He brought her remains back to our village for a proper burial. But I can’t remember any of it.” Marysia pauses, in tears. “No, I wasn’t young, I would’ve been sixteen or seventeen. I just blocked it. Completely. I remember him going away to get her body for burial and then—blank. Strange, isn’t it? At various times, I’ve wanted to go under hypnosis, to see if I could retrieve those memories.”

Marysia migrated to Australia in 1948. She wanted to do medicine like her father, or nursing. But she had no money to study, and no language either. “So, what does a woman who can’t speak English do? I went to do sewing. I did that for a while, then a little accounting and then I got married.”

Marysia lived a good life — wife, mother and grandmother. She had little contact with Poland, but her mother’s story always lay buried in the back of her mind.

When she was invited to Warsaw to take part in a World War II commemoration ceremony in 2014, she decided she would go. After 60 years, Marysia was ready to face her past, and to return to the guest-house where she last saw her mother. Except that she couldn’t remember the name of the Polish family who had taken them in. She had blocked it, just as she had her mother’s funeral,

There was no one to ask; by then her father and brother had both passed away. So she returned to Australia, bitterly disappointed. She kept trying to remember. And for a further 10 years—nothing came.

Then one day in 2014, 72 years after her mother’s death, she woke up one morning with their name on her lips.

At 85 years old, it was safe to remember.

Once Marysia knew the name, her sister Eve, a research whizz, set to work.  She discovered that Janina and Leshek, the sister and brother who were Marysia’s contemporaries, were still alive, still in Poland, in fact still in the village. Marysia went back to Poland.

“He said to me, ‘Oh you were so beautiful, I was after you, but you weren’t interested.’ He was right. I wasn’t interested in boys at that stage, I only wanted to swim in the river and ride horses. I was very young—twelve going on ten.”

Marysia is still processing the visit and the return to her past. But she often finds herself looking the photos which the Polish family sent to her from that lost summer of 1942. She says that perhaps some pain inside her has been eased. How extraordinary that she has lived so long, and has been able to wait all those decades to allow her memories to return. 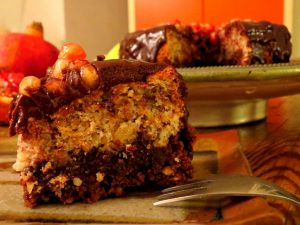 Now after that story, it’s time for a cup of tea, and a piece of Marysia’s wonderful Day and Night cake.

Please support our Kickstarter campaign. Pre-order our book Just Add Love, with stories and recipes, including this one from Marysia Segan and enable us to fund the printing of this unique book. Link: hyperurl.co/shbwdb

Irris Makler is an Australian author and foreign correspondent based in Jerusalem. Her upcoming book Just Add Love – Holocaust Survivors Share their Stories and Recipes has recently launched on Kickstarter. It will be available from April 2019.