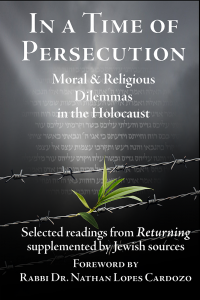 When does survival become a crime?

Where was God during the Holocaust?

What are the limits of human responsibility in the face of overwhelming coercion?

These are just some of the questions faced by Jews—particularly religious Jews—during the Shoah. This guide explores these questions and more through a series of dialogues between Ovadya, a former member of the Birkenau Sonderkommando and the rabbi to whom he turned for judgment.

Ovadya’s story is told in detail in Returning, (Kasva,2018). However, this discussion guide stands on its own: the included dialogues can be read and pondered without reference to the rest of the story.

Each discussion topic focuses on a particular dialogue between Ovadya and the rabbi, supplemented with sources from Jewish texts, followed by a few questions to get the discussion going.

Download pdf formatted for double-sided printing: In a Time of Persecution: Moral & Religious Dilemmas in the Holocaust - Letter Size