You are here: Home / Memory & History / More than Just a Book Review: A trauma therapist explains the limits of memory 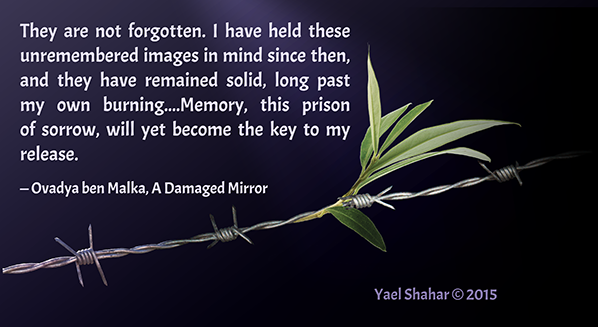 In a new review of A Damaged Mirror, therapist Sheri Oz writes about the limitations of memory and the challenge of forgiving. More than just a book review, this article plumbs the depths of the human need for control over our fate–and what happens when that control is absent.

Selected for the Birkenau Sonderkommando, seventeen-year-old Ovadya collaborated in the killing of Jews in order to save his own skin. Put like that, it is legitimate to ask why, or if, the issue of forgiveness should even arise. However, we must consider the circumstances under which he operated before we pass judgement; he writes:

Deep down, I know that my humanity is limited by necessity, and that I can be made to do anything for the sake of a little more life.

In other words, he felt could be made to do anything because he was willing to do anything in order to take the next breath. Others may have chosen to die and probably some did.

In Milgram’s famous psychology experiment (1963), the one that provided the basis upon which informed consent is now required for all studies involving human participants, many people were shown to be relatively easily pressed to do things under duress that go against their own moral values. If scientists in a laboratory provided sufficient authority to take away individuals’ sense of personal agency, then how much more so Nazis in uniforms, when the entire environment was controlled by those Nazis!

We would all like to think that if we had participated in Milgram’s experiment, we would have been the ones to have said “no” to the request that we increase the electric charge applied to the research confederate feigning screams in the next room. However, when the cost of noncompliance is your own death, the issue is not so easily set aside with the facile claim that we certainly would NOT have acted as Ovadya did.

The question is: did Ovadya have a choice?

Perhaps the question is unanswerable. Perhaps Ovadya’s guilt implies that the answer is “yes”. In any case, only one who, like Sheri Oz, has been involved with helping others deal with the impact of such choiceless choices can explain exactly what that guilt signifies. Recovery from trauma requires an ongoing process of facing the worst that is in us, as well as the worst that has happened to us. In the end, we may find that we are human after all!