You are here: Home / Miscellaneous / Non-Jewish Wine and the Perils of Halakhic Over-compensation

In Massechet Megillah we find a fascinating deconstruction of anti-Semitic propaganda. Haman, the wicked counselor of the King of Persian, counsels the King to murder all the Jews in the Kingdom and add their wealth to the royal coffers:

This imaginary dialog presents one of the more common complaints against the Jews: “why should we tolerate them if they refuse to marry us, or even to drink wine with us?”

And indeed, Jewish Law really does restrict Jews from drinking wine produced by non-Jews, or in some cases, even touched by non-Jews. Rabbi Nathan Lopes Cardozo tells a poignant story of how his over-zealous enforcement of this ruling caused a breach between him and his brother that remained unhealed for many years.

Clearly, this particular law needs to be interpreted with far more nuance than is sometimes the case. Throughout history, such laws have been re-interpreted, re-explained, and even re-drawn to mean the exact opposite of their original intent. And yet, the original version remain “on the books” even if it is not actually followed; it remains right there in the written records of Jewish Law. But if such laws are so problematic, why keep them on the books at all? 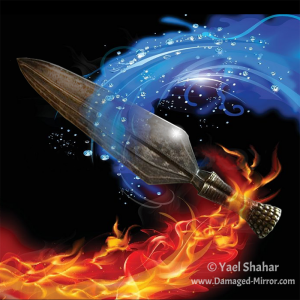 The answer may lie in the need for creative tension in halakhah. Jewish Law is continually pulled in opposing directions: between respect for those traditions that have become normative halakhah and the need to refine halakhah to adapt to changing circumstances. It would seem that this tension is a necessary part of maintaining Jewish continuity. It’s a bit like biological evolution: if change happens too quickly, the result may be a non-viable mutation. If it happens too slowly, there is a danger of losing whole communities due to failure to adapt.

The problem of course is that in any evolutionary system, adaptations become part of the system, remaining in force from then on.  For example, consider the way the institution of Havdalah was added to the Ma’ariv prayer on Motzei Shabbat (Brachot 33b):

This set up a situation where the bracha on the wine might end up being a bracha batelah—a misuse of God’s name—as the bracha is not needed. Here, the adaptation became a liability.

This brings us back to the example of the prohibition of drinking the wine of non-Jews. During a particularly horrible time under the Romans, Shammai served as Nasi (President) in place of Hillel, who had died. As no Av Bet Din (Head of the Judiciary) from the minority had been elected, Bet Shammai held a solid majority. The Talmud (M. Shabbat 17a) tells how, in the absence of opposition, Shammai passed “18 decrees” that were contrary to the opinion of Hillel. In various places, the Talmud reconstructs the content of these decrees, many of which were designed to strengthen Jewish identity by insisting on strict separation between Jews and non-Jews. In one example, the Talmud records the atmosphere of turmoil between factions:

We tend to see these rulings as backward and overly conservative, as not adapting to changing circumstances. But if you think about it, they actually were a reaction to changing circumstances!  Strict ordinances requiring separation from non-Jews were in answer to a very real need: the land was full of Roman soldiers who, upon the end of their tour of duty, were given Jewish lands. The possibility of Jews cozying up to them in order to garner favor with the Roman government was cause for worry. The rulings forbidding Jews from eating with Romans were a natural reaction to the needs of the moment.

However, Beit Shammai’s impulsive adaptation to the needs of the day ended up causing problems later on. And this is exactly why adaptation must proceed slowly and carefully; overly hasty adaptations can create more problems than they solve.  All too often, the circumstance that prompt the adaptation is merely a passing phase, but the changes to Halakhah remain.

Halakhah must continually be updated and revised to take into account changing circumstances, but what is important is the process by which this takes place. Beit Shammai’s “18 rulings” were pushed through without regard to due process, by taking advantage of a temporary—and anomalous—majority. The result was a situation where the halakhah was changed to accord with a minority opinion. The results are still with us today.

This, in fact, is one of the reasons why the Halakhah is normally in accord with Beit Hillel: they are careful to record both opinions. The Gemara too records all opinions and rarely provides a definitive conclusion. One reason for this is the possibility that the minority opinion may be useful at a later date, when circumstances change. But another reason may simply be that by providing all opinions, the Gemara teaches a subtle lesson: not even the greatest rabbinical authorities have access to absolute truth. Instead, we have the process by which Halakhah is determined. In the absence of absolute truth, collective truth is enough.

And this brings us back to the question with which I began this essay: why keep maladaptive halakhic rulings “on the books”. The answer is that, just as we record minority opinions, we also record those rulings that may, on hindsight, have been mistaken. For mistaken or not, they are a record of the process that has brought us to where we are today, regardless of what the neighbors think! In the end, “both these and those are the words of the living God”—neither Beit Hillel alone, nor Beit Shamai alone, but both together constitute the words of the living and growing God.