You are here: Home / Memory & History / Parashat Balak and the Revival of the Dead 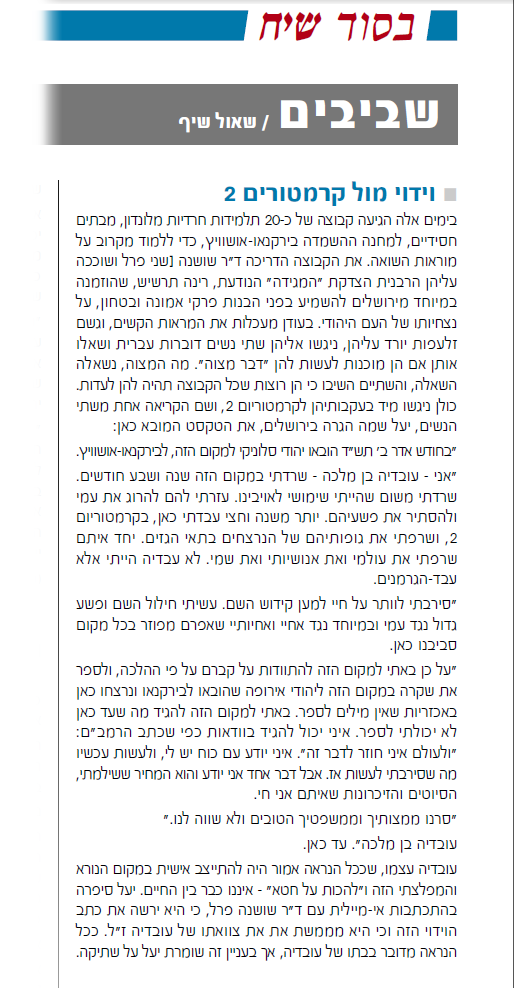 Seven years ago, I stood in the courtyard of Krema Two in Birkenau and participated in the Revival of the Dead. It was a chilly day at the end of June. Under a light drizzle I read out a viddui written the day before by a young man who had died in the Autumn of 1944. (Yes, time is one of the first casualties in this odd business of T’chiat HaMetim.)

I will share the text of the viddui below:

Therefore I have come to this place to perform the viddui at their grave as required by our laws, and to tell what happened at this place to the Jews of Europe, murdered here with cruelty that no words can express. I have come to tell what I have not been able to speak aloud until now. I cannot say with certainty that, as the Rambam wrote: ‘…I will never repeat my deeds.’ I don’t know whether I would have the courage now to do what I should have done then. What I do know is the price I have paid, the nightmares and the memories with which I live. ‘We have departed from Your Mitzvot and Your laws, and have gained nothing…’

The viddui was witnessed by several dozen young women from a seminary in London. The event even made the news—or at least the very local news of the school where my witnesses learned. But even there, the headline was not “Sonderkommando comes back to life to do T’shuvah” but something far more prosaic. So often the real miracles go unreported, unappreciated, or even completely unnoticed.

And so it is supremely fitting that the viddui in Birkenau happened to coincide with our reading of Parashat Balak. For one of the lessons of this week’s parasha is that things aren’t always what they seem, that human intentions don’t always pan out the way we imagine, and that there is an overall scheme of things invisible to the limited sight of a single generation.

The blessing in disguise

Parashat Balak is the story of Am Yisrael’s first steps onto the stage of world history. A band of escaped slaves, against all rhyme or reason, has managed to defeat the army or a regional power. The surrounding nations are understandably worried about the horde on their doorsteps. The defeat of the Emorite kings turns this anxiety into panic.

Balak, the King of Moav is next in line in the path of the Israelite hordes, and so he gets together the elders of Middian and Moav and sends them to hire Bilaam, a famous sorcerer:

Of course, the irony is that it isn’t Bilaam who has the power to curse or to bless. As Bilaam himself will later say:

In the end, try as he might, Bilaam fails to curse the Israelite tribes; each intended curse somehow twists itself into a blessing instead. Perhaps one of the underlying lessons is that even what we think to be a curse may later reveal itself as a blessing in disguise.

Free will and confirmation bias 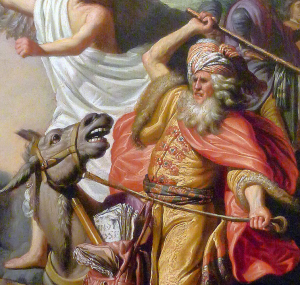 The story of Bilaam’s curse would appear to raise questions about human free will. Bilaam repeatedly tells his employer, King Balak, that he is not be able to do anything without the permission of the God whom he serves.  And just to be sure that we get the message, we readers are informed that the God who directs Bilaam’s speech is none other than the God of Israel. Whether Bilaam knows it or not, he is part of the divine plan in which the people of Israel will play a key role.

But does Bilaam have no will of his own? And what of Balak, the king of the Moabites, who  hired Bilaam in the first place? It would appear that both of them, in the very exercising of their will, are playing a role in a greater drama of which they have no knowledge. The difference is that Bilaam “the man whose eyes are opened” is slightly more self-aware than is Balak; he knows that he’s being manipulated.

On this, Rashi notes that Bilaam’s fate merely took him where he already wanted to go.

This is a succinct and elegant way of summing up what we would today call “confirmation bias”—the idea that we tend to filter out information that goes against our prior convictions, and instead we reinforce the rightness of our decisions. Thus, our first steps down a particular path will tend to reinforce the rightness of that path in our minds, even as we ignore all evidence to the contrary.

But was Bilaam not a prophet? If he was aware that he was being manipulated, could he not see through his own confirmation bias to the truth? The Torah depicts Bilaam as gifted with prophecy; at least in this instance, he was given words to say that could not have come from his own limited scope of time and space. In his attempt to curse the Israelites, a “meta-truth” slips out:

This glimpse into a will beyond ones own is, according to Martin Buber, one of the dilemmas of true prophecy—the vision we are given depends on our being part of the equation:

[The true prophet’s] God is the God of a truth which, as far as it is open to mortal man, enters really into time, interwoven with human deeds and misdeeds, that is, it can never be depicted beforehand. “For there is no divination in Jacob, nor soothsaying in Israel,” so it is put basically in Balaam’s speech (Num. 23, 23). “It will be said in time to Jacob and Israel, what God is working.” The true prophet, this quivering magnet needle, pointing the way to God, is altogether bound by this “time.” He is bound by the situation of the hour in which God is preparing the work He has in mind, and therefore the decision is not yet made, but is being made. Men cannot hear from his mouth, the mouth of the true prophet, what they wish to hear; they can only hear what they shall hear, that is what is designed in this hour and set before them, that they may let drop into it their “Yes” and “No,” their decisions and their refusals to decide, the molten metal of their hour, and supply God with the material for His work. [my emphasis] (The Prophetic Faith, pp. 175-6)

Our free will is the material on which God works to achieve the desired goal. We are no less free for our playing a role in a history which we may never see in its totality.

And so, seven years ago, I stood in the courtyard of the Krema in Birkenau and brought to a close a series of decisions and missteps taken nearly 80 years ago, and in doing so, I played my own small part in the greater phenomenon of our days. It is no coincidence that my own t’shuvah was bound up with the greater return of our nation to its land and its destiny.

Alone of all nations, national death was not the end for the Jewish nation. T’hiat HaMetim—revival of the dead—was part of the initial design spec. Our rebirth was foretold at the same time that our death as a sovereign nation was declared inevitable.

We aren’t so much built to survive as to return!

* The story behind this remarkable Viddui at Birkenau is told in Returning, due out this September. Advance Review Copies are available to reviewers and book bloggers on Edelwiess and Netgalley.