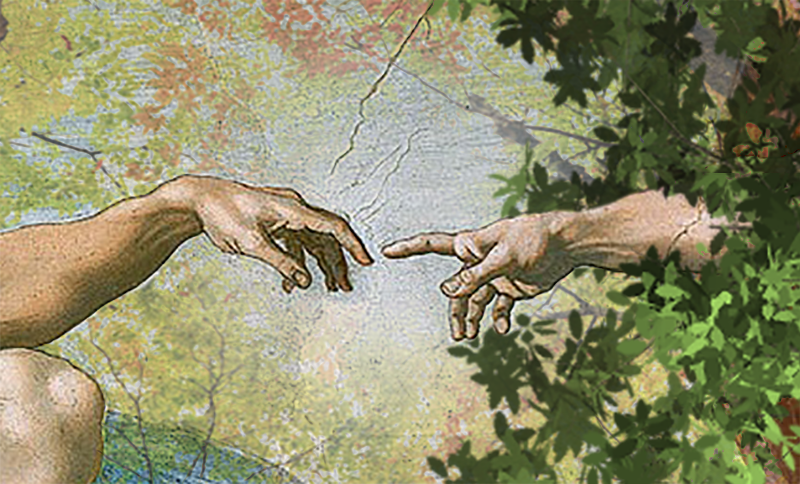 It’s been said that the first chapter of B’reishit (Genesis) contains polemics against just about every worldview common in the ancient world. I want to focus here on just one of those worldviews: the notion of destiny, that a person’s fate is written in the stars. Au contraire, says the Torah: as soon as humans enter the world of B’reishit, they encounter choice.

All is foreseen, but freedom is granted

Some readers may recognize the headline above as R’ Akiva’s famous paradox on human free will. How can humans have freedom of choice if God knows everything? For that matter, how can free will exist at all in a deterministic universe? While modern physics is not deterministic, and in fact contains unpredictability, self-creation remains one of the more mysterious aspects of the human condition.

“Let us make man in our own image,” says God. To whom was he speaking? I once heard it explained by Rav Ish-Shalom: “God was speaking to human beings: Let us, you and Me, create human beings who will live in My image.”

But what does צלם אלו-קים—the Image of God—actually mean? Surely it can’t mean a physical likeness, as God is completely unlike anything in the created world. I would like to explore an option championed most clearly by R’ Moshe ben Maimon (Maimonides, usually referred to by the initials of his name: RaMbaM).

“Free will is given to all men,” writes the Rambam. “If one desires to turn himself to the path of good and be righteous, the choice is his. Should he desire to turn to the path of evil and be wicked, the choice is his.” As a proof text, the Rambam cites our Parashah: after Adam eats of the tree of knowledge, God says: “The human has become one of us, knowing good and bad.” But the Rambam reinterprets this verse by means of a subtle shift in punctuation. He puts the period in a different place, giving the verse a whole new meaning: “The human has become one—has become unique, a new kind of being. Memenu—from within himself—he knows good and bad.”

In eating of the fruit of the Tree of Knowledge, we became capable of anything. But did we not have that freedom prior to the eating? After all, we freely chose to disobey a Divine command! Perhaps what was changed was not our essence, but simply our awareness of it: suddenly we were conscious of our ability to be other than we are, and of our responsibility for our actions.

Thus, the taking of the fruit of the tree of knowledge “completed” the creation of human beings. By giving humans the freedom to disobey, God allowed us to decide what form human beings would take. By reaching for the fruit of the tree of knowledge, the decision was made, for better or worse. The “curses” that followed were simply the natural consequences of that choice: larger brains meant more difficult childbirth and a prolonged period of dependence on parents, which eventually lead to the cultivation of agriculture and settled societies…one condition following another, but all inexorably linked to that one first action—the decision to willfully take control of human destiny.

What type of fruit does knowledge bear?

But what exactly was the fruit of the Tree of Knowledge? Was it a real fruit, or “merely” a metaphor? I’ve explored the metaphorical option in A Glimpse of What Might Have Been. Here I would like to take a closer look at the fruit as… well, fruit!

This passage describes the tree as both tasty and beautiful, but gives no hint of what type of tree it was. The Talmud provides a few speculations:

Midrash Rabbah on Parshat B’reishit adds a fourth opinion, that the fruit was an Etrog (citron):

R’ Abba hangs his interpretation on a peculiarity of the language in this verse: “the tree was good to eat” even as the fruit was good to eat. This notion, that a tree and its fruit may both be edible is the focus of an intriguing passage in Midrash Rabbah: Why was the earth cursed along with Adam after he ate from the Tree of Knowledge?

Rav Kook references this midrash in his book, Orot HaTeshuvah:

And so we gain a new consciousness of… our own consciousness. Most animals aren’t overly concerned with means and ends. If the tree tastes the same as the fruit, then why work harder for the fruit? Just take a bite of the tree! Means and ends are the same, without conscious differentiation between them. But Chava looked at the tree of knowledge and made a conscious choice: the fruit is the goal; the tree is just the means to the fruit. In making that choice: to consciously differentiate between the means and the ultimate goal, she set the course of human history.

And God? What was God doing all this while? We tend to see our choice as a fall from the innocence of pre-human, pre-conscious existence, and so we see only the angry face of God, reflected in the consequences of our choice.

But there’s another possibility. After all, our parashah is not the only case in our Torah in which humans decided and God reacted. I like to think that, just as in the story of the Tanur shel Akhnai, had anyone been privy to God’s mood at the time, he would have reported back to us: “He was laughing and saying, ‘My children have defeated Me. My children have defeated Me.'”