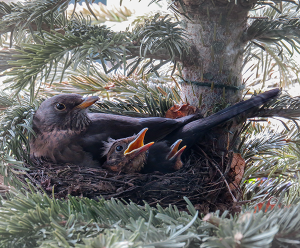 In his weekly parshat hashavua column, Rav Alex Israel poses some interesting questions on this week’s parasha: Ki Titzei. Quoting Professor Shalom Rosenberg, Rav Israel notes that there are two parallel ways of looking at the mitzvot of the Torah. On the one hand, we can compare the mitzvot to a soldier’s beret, which serves to express the discipline to which the soldier is committed.

On the other, hand, we can also see the mitzvot not so much as a means of self-identification, but rather as expressing a pragmatic need. The example Rav Israel gives is the requirement to wear safety belts in cars. The safety belt may be inconvenient, but we know that it’s there to protect us.

A beret or a seatbelt?

So which is it? asks Rav Alex. Are the Torah’s commandments more akin to the requirement to wear an army beret or a seat belt? This question helped me to hone some ideas that have percolated over the years, in particular with regard to one of the signature mitzvot of our parasha:

And yet, I believe that these cases and their prescribed behaviors are never far from the teaching of general principles. The totality of the laws illustrates the values and principles on which our society should be based. How do we know this? Because the Torah says as much straight out. The list of mitzvot in Ki Titsei culminates in the far-reaching statement:   “So that it will be well with you and your days will be long (לְמַעַן יִיטַב לָךְ וְהַאֲרַכְתָּ יָמִים).

A cursory glance at the list of mitzvot in our parasha reveals a thread of pragmatism running through them all: they are all mitzvot which mitigate the impact of common societal ills, such as atrocities in war, honor killings, and prolonged poverty. The outcome of these laws is simple cause-and-effect: the concrete benefits of a well-run society where justice is valued, and greed and vengeance are held in check by law.

But what sort of long life? Perhaps the fact that the bird’s nest—seemingly the most trivial in the whole series—is the last one listed is itself an indication of what “long life” means in this context. A society that does not destroy two generations of food animals at once is one that is willing to forego short-term gain at the expense of long-term benefits. Greed is kept in check by rules internalized in each generation. If this applies even to “windfall” opportunities such as a bird’s nest found along the way, how much more should it apply to more critical resources!

Honoring the past as a guarantee of continiuity

As with the bird’s nest, the length of days associated with this mitzva would appear to pertain to the society as a whole, rather than the individual: a society that respects its elders is one in which the past is a guide to the future, where the wisdom of earlier generations is passed on, generation to generation. It is a society whose culture will survive into an unknown future. Only societies that are connected to their past—that honor and cherish their pasts and give this honor concrete form by cherishing the corporeal representatives of the past—only such societies have any stake in the future.

So, to the question of whether the mitzvot are more akin to the beret or the seat belt, I think the answer would have to be: “yes!” Some mitzvot, in some situations, may be more akin to the beret—a sign of identity, belonging, and allegiance to a higher will. On the other hand, I think the particular list of mitzvot in Ki Titsei are mostly of the “seat belt” kind, but with the understanding that we wear the seat belt in order to survive to fulfill our mission. One cannot really separate the wearing of the beret from the pragmatic concerns of living in a well-ordered society. This is the true meaning of our vocation: to be a kingdom of priests and a holy nation.