You are here: Home / Parashat HaShavua / Parashat Vayera: The lessons of Avraham’s plea for S’dom 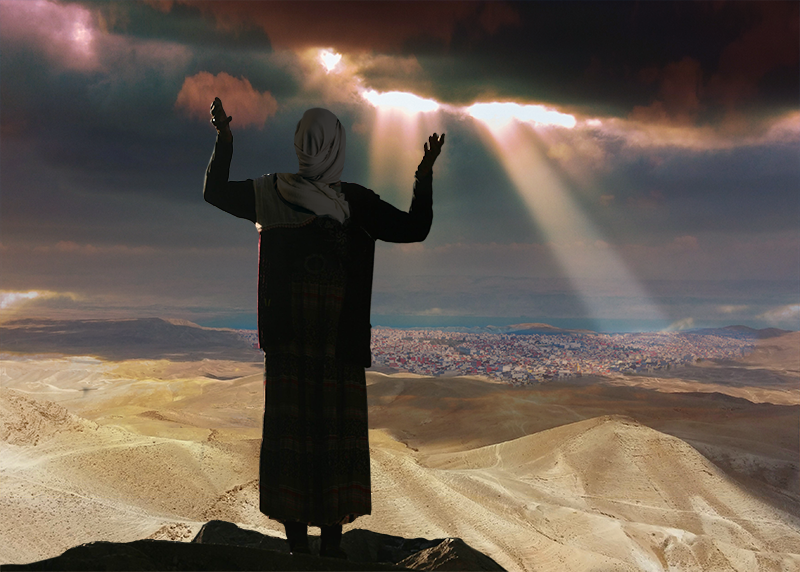 With these lines, the Torah ceases to deal with individuals and begins to deal with nations. God “muses aloud” about whether to confide in Avraham the upcoming destruction of the nearby metropolis of S’dom. It’s surely no coincidence that the destruction of S’dom is foretold in the very passage in which God speaks of Avraham’s descendants’ doing צדק ומשפט— what is right and just.

Avraham’s reaction to God’s declaration is to launch into an impassioned plea in defense of S’dom, using exactly those terms:

Avraham seems to be turning God’s terminology against Him! And yet, in whose cause is he using these vaunted qualities? For whose sake is he attempting to thwart God’s justice?

S’dom is infamous as an iniquitous city. But what is it about the place that makes it worthy of destruction?

The prophet Ezekiel gives us a hint:

According to the sages of the Talmud (Sanhedrin 109 a-b) S’dom’s problems do not, at first glance, appear to be all that grievous: the sin of S’dom is simply the unwillingness to share! The concept of Midat S’dom (the quality of S’dom) in Jewish law refers to the reluctance to benefit others even if one loses nothing by doing so. The laws in S’dom were said to be weighted in favor of the rich and against the poor, wayfarers were welcomed only if they could afford to pay, and there were laws against feeding beggars.

In truth, these things can be said of many a legal system which institutes strict justice. Laws, by their very nature, will be weighted against the poor, simply because the poor are most likely to violate the law, out of necessity, ignorance, or despair. They are also most likely to be caught. And one can steal a small amount from another without being in actual violation of law.

However, a society which rules according to the strict letter of the law—choosing משפת (justice) over צדקה, (charity, mercy, compassion)—may be a “just” society, but it will be a society without any sense of community and solidarity, without righteousness. It will be nothing more than a collection of individuals, not a community. 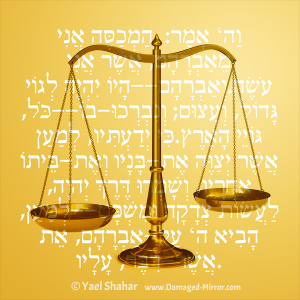 The right of private property and the good of the community are opposing values. S’dom is a society that has uncompromisingly chosen one over the other. It is a law-abiding society: no one transgresses against another’s property. But neither do they share. There is no charity or mutual assistance. The rich get richer and the poor get poorer. Such a society descends—with the full consent of the law—into greediness, lack of empathy, and cruelty.

Likewise, justice and righteousness, the two values that Avraham is to pass on to his descendants, are posited as opposites in the Talmud:

“Where there is justice (mishpat) there is no charity/righteousness (tzedaka).” (M. Sanhedrin 6b)

Only in the case of a compromise can both values be satisfied—each at the expense of some measure of the other. A compromise sacrifices justice to charity, truth to peace. It is a conscious attempt to reconcile two competing values. This is exactly what is missing in S’dom, where strict justice wins out over charity.

Avraham is well aware of the state of S’dom. After all, when he emerged victorious in battle against S’dom’s enemies, he refused to take “even so much as a shoe string” of the plunder, lest it be said that the king of S’dom made Avraham rich. His desire not to be seen in the pay of a corrupt regime tells us what Avraham thought of S’dom.

And yet, he is willing to put aside what he knows about the place for the sake of compassion for its residents. Perhaps Avraham is here applying the lessons of last week’s parasha—that people can change, that they can choose their own destiny. He argues passionately for mercy against strict justice, despite what he knows, and so exemplifies the quality that sets him apart from S’dom.

There is a profound lesson that we can learn from this—and perhaps this is part of the blessing that Avraham conveys to our generation. Avraham teaches us that it is God’s job to administer justice (or karma), to weigh out the future of individuals and nations based on their past and present. But it is our job to stand in opposition, just as it’s our job, as living beings, to oppose entropy.

We can accept what happens to us personally as just or deserved or meant to teach us something. But when it’s someone else who is suffering, we must never presume to know the reason or speculate on the meaning of it. The only way to give meaning to suffering is to oppose it with everything we have, to throw all of our resources into ending it.

It’s God’s job to administer justice; it’s our job to defend each other, even against God’s justice if necessary.

This is the trait that makes Avraham “Av Ram”—a father of many. God is gambling on the future in one particular family. Where with Noah, the success of God’s program depended on Noah’s physical progeny, now it depends on a different kind of legacy—a cultural one.

The Rambam in Hilchot T’shuvah notes that one who acts in a mean-spirited way is clearly not of the stock of the Jewish people,

The Rambam may have in mind a genetic propensity to kindness, which marks its possessor as of the family of Avraham. But he may mean this as a cultural, rather than a genetic legacy: a person who has not inculcated the values passed down from Avraham and Sarah has excluded himself from the Jewish people—if not by nature, then by nurture.

This is the trait that we are meant to learn from Avraham. This is the trait that makes his descendants a blessing to the nations. A society built on the ability to compromise where needed, to go beyond the letter of the law, can become more than just a collection of individuals; it can become a people. The notion that achieving a balance between justice and righteousness is “the way of Hashem”—that God (and history!) favors the nation that aspires to inculcate and live by these values—is a very optimistic one. But it’s also a very pragmatic one; time and time again we see that nations that do not live by these values doom themselves to failure and eventual disappearance.

The lessons of Avraham’s plea for S’dom will be passed down to his descendants who collectively will be called “Yisrael”, one who struggles with God.