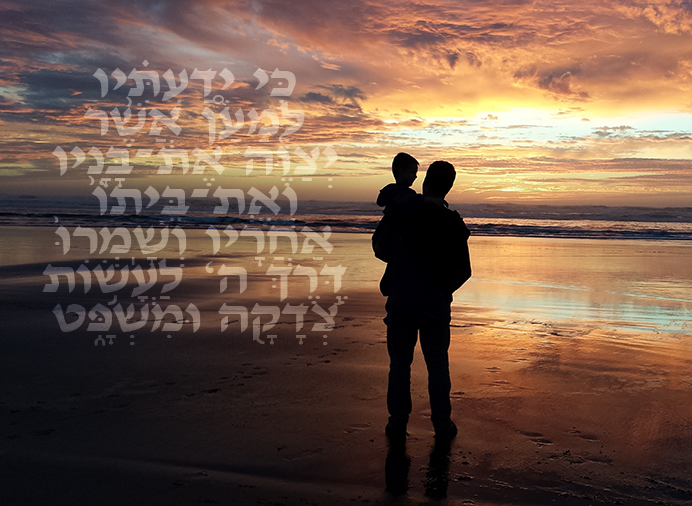 This passage is as close as the Torah ever comes to telling us why Avraham was chosen by God to found a nation: he was singled out for his ability to pass on a love of righteousness and justice to his offspring.

The phrase commonly translated as “to do righteousness and justice” is “la’asot tzedekah u’mishpat“. We can get an insight into what this entails from the way these words were interpreted by the very “posterity” to whom Avraham bequeathed his teachings. For example, the prophet Yermiyahu lists the kinds of deed which qualify as doing misphat and tzedakah:

Thus said the Eternal: Do what is just and right [asu mishpat u’tzedakah]; rescue from the defrauder him who is robbed; do not wrong the stranger, the fatherless, and the widow; commit no lawless act, and do not shed the blood of the innocent in this place. (Jer. 22:3)

If taken in a purely judicial sense, tzedakah and mishpat are at two ends of a legal spectrum—mishpat signifying strict justice, and tzedakah signifying charity. Indeed, the Talmud (Sanhedrin 6b) views them as juridical opposites and derives some core principles from the inherent tension between them.

However, if we see tzedakah u’mishpat as denoting “compassion” and “righteousness” the apparent dichotomy vanishes. True justice consists of looking out for the powerless and disadvantaged, who are without the means of achieving justice through the usual channels, while dealing compassionately with one another means treating the other as we would like to be treated. Thus tsedekaka u’mishpat are those actions that are lifnim m’shurat hadin, that go beyond the strict letter of the law. They are part of the moral imperative.

The way of the Eternal

And this brings us back to God’s choice of Avraham. But why does God place so great a premium upon Avraham’s passing on to his offspring his love of “tzedakah u’mishpat”?

Our sages highlight Avraham’s virtues by showing us their opposite. Midrash Rabbah has Avraham facing off against Nimrod, the King of Babylon, who cast Avraham into a furnace after the patriarch refused to worship fire. Nimrod is everything that Avraham is not; his very name comes from the word “to rebel”:

But why this portrayal of Nimrod as the bad guy? After all, the Torah merely says that Nimrod was a mighty hunter of renown. It is only natural that such a hero would rise to leadership. And indeed, our tradition identifies Nimrod with the King of the unified nation that built the tower of Bavel.

And yet, for all this, Avraham is our hero and not Nimrod:

One obvious answer is that kindness and compassion are among the traits that ensure the survival of communities and nations. The opposite of tzedakah u’mishpat is “iniquity and perversity”, actions which bring about the ruin of any nation which adopts them. A nation that lives by preying on the weak and vulnerable may have temporary ascendancy, but is destined to collapse of its own corruption in the end.

The assumption that justice and compassion really are “the ways of the Eternal”—that God favors the nation that aspires to inculcate and live by these values—is a very optimistic one. But it’s also a very pragmatic one; time and time again we see that nations that do not live by these values doom themselves to failure and eventual disappearance.

“Power tends to corrupt, and absolute power corrupts absolutely.” wrote Lord Acton, “Great men are almost always bad men, even when they exercise influence and not authority…There is no worse heresy than that the office sanctifies the holder of it.”

This, in a nutshell, is the reason behind the midrashic polemic against Nimrod, and the demonization of him as the opposite of Avraham.  Avraham and Nimrod represent two fundamental worldviews: Nimrod represents the worldview that admits to no moral lines, or believes that crossing moral lines has no long-term consequences, that survival of the fittest means the survival of the most ferocious. It is easy to see that such a worldview must clash with the Jewish view, which posits that “the fittest” are those who build just societies and live within moral limits, who ascribe evolutionary value to morality and justice.

The Nimrod type is part of human nature, and we naturally look up to the charismatic “hero” type of leader. But this proclivity to seek the wrong heroes is exactly what the Torah wishes us to transcend. By suggesting that Avraham was chosen for his love of tzedakah u’mishpat, the Torah assures us that the ways of the Nimrods of the world are an evolutionary dead end.

When God says of Avraham: For I have known him, that he will teach his children to love justice and compassion” God is in effect saying, I have a stake in the future of this nation, and I know they’ll survive as a nation. But more, we are told what the rules of the game are, and to pick our heroes accordingly. After all, God did!