You are here: Home / Parashat HaShavua / VaYeshev: If you will it, it is no dream 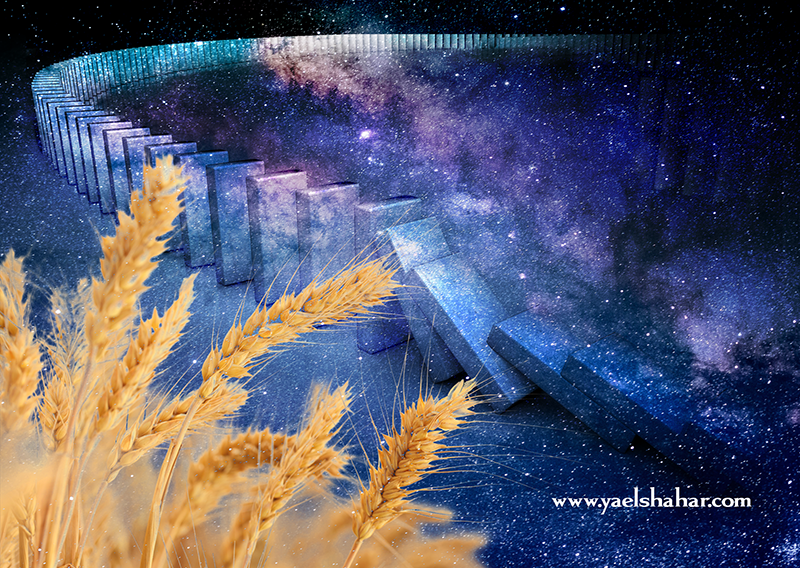 The story of Yoseph is the dawn of our own era, and it is propelled along by the motive force of dreams. Yoseph dreams, the people around him dream, Pharoah dreams.…These dreams come in pairs, and each of them is a window into a possible future—perhaps a future that would never come to pass had the dream never been told.

Where do dreams untold go? We don’t know, because we are the product of those that were told.

Listen to this dream I had!  There we were, binding sheaves in the field. Then here, my sheaf arose and stood upright; and your sheaves stood all around and bowed down to my sheaf. (B’reishit 37:7)

What moved Yoseph to share this dream with his brothers? Pride? Spite? Or perhaps it was just that he was immature and insecure. Certainly his siblings had reason enough to hate him for his father’s favoritism. And naturally enough, hearing about his grandiose dreams didn’t help: “they hated him all the more” .

But it was Joseph’s second dream that was the last straw:

Look, I have dreamed another dream! And this time, the sun, the moon, and the eleven stars bowed down to me. (37:9)

Now it wasn’t only his brothers who had cause for anger at Yoseph; his father too was alarmed: “What is this dream?” Ya’akov asked. “Shall your mother and I and your brothers indeed come and bow down to the earth before you?”

We aren’t told Yoseph’s answer, but only that Ya’akov took note of the dream.

Did his brothers also take note? Did their father’s anger subtly hint that Yoseph’s days of playing the favorite were over? The white space between the letters is rife with possibility, but little certainty. We know only the outcome: Yoseph was soon sent off by his father to check up on his brothers. Perhaps this was Ya’akov’s way of trying—finally—to let go, to allow Yoseph some independence.

And off he went, his father’s pet, to meet treachery and deceit. He could be forgiven for thinking that his father was in on it from the beginning. He had no way of knowing how his brothers had plotted and double-crossed each other, nor how his father mourned his apparent death. There are ample hints that he discovered the truth only decades later.

But let’s go back to the dream that set this whole adventure in motion. Sheaves.… But Ya’akov’s family were shepherds, not farmers! A dream about sheep would be understandable…but, sheaves? Only in hindsight does it all make sense: the need for grain will drive Ya’akov’s remaining sons down to Egypt to buy food in a time of prolonged drought.

And the sun and moon? The obvious interpretation–and the one that Ya’akov had immediately jumped to—was that the sun and moon represented him and Rachel. But it was a mistaken interpretation. And herein lies the crux of the issue: had Ya’akov interpreted this dream correctly, it’s possible that its prophetic quality would have been broken. Why? Because the sun and moon in the dream had nothing to do with Ya’akov and Rachel! Nada! Zilch! Bupkis!

To what then did they refer?

This is where all potential streams of time become entangled in the web of prophecy. In Egypt, Pharaoh styled himself the descendant of the sun god and the companion of the moon god. Yoseph’s dream had to do with his future position of power in Egypt, and not with his family at all. His dream was far more grandiose than he could have ever imagined: the Land of Egypt itself would bow down to him!  And yet, had Ya’akov not misinterpreted the dream as referring to himself, the whole chain of events which led Yoseph to Egypt might not have come about. On such insubstantial misdirection the first domino begins to topple. The fluttering of a butterfly’s wings that will eventually cause the typhoon.

And the rest, as they say, is history.

The lesson—or at least one lesson—of this story is that it isn’t dreams that move events; it is their telling!

A subconscious thought becomes explicit when it is articulated in speech. Things unspoken—and unspeakable—may have tremendous influence on us, but there is no volition involved. Until we articulate the dream and bring it into conscious awareness, we have no control over it.  By telling, we bring a wordless reality into the realm of time—of history. Had Yoseph never given reality to his dreams by sharing them with others, their intersection with history would have been stillborn.

But it is only in our day that we see the fullest blossoming of the chain of events set in motion by Yoseph’s first dream. Consider: the dream knocked over the first of the falling dominoes that would lead Yoseph to Egypt, just in time to find his vocation as an interpreter of dreams—and of economic trends. His rise to power paved the way for the salvation of his family in a time of famine. But the price—Yoseph’s virtual enslavement of the Egyptian population—would have to be paid.

But of course, the story doesn’t end there. In fact that was only the beginning. We, here and now, are firmly embedded in the timeline of Yoseph’s dreams. The Egyptian Exile was the prototype of all exiles, and the eventual redemption was the prototype of all redemptions. Including our own. In generations to come, our descendants will tell and retell the End of the Long Exile just as we retell the Exodus from Egypt. And here too, the connection between potential and actual lies in dreams. Or more accurately, in their telling.

It’s been said that in our day, Am Yisrael is “re-entering history”.  Is it simply that we are rejoining the “family of nations” by once more gaining sovereignty in our own state?

No. We were a nation long before modern nation-states came on the scene.

Nor can it be said that we had no influence in history during all these centuries of exile.  Quietly and without any conscious coordination or volition, we have molded and shaped the moral consciousness of nations. Our literature and thought has become part of that of nearly all Western nations, disseminated by new religions that base their primary teachings on our Torah. The same is true of the Muslim world, where Islam has adapted many Jewish legal concepts to local conditions. Whether these nations would admit it or not—whether they are even conscious of it or not—we have influenced their implicit thought processes. We are part of the subconscious of the world.

The difference is that now we are no longer merely a subconscious thought in the mind of the nations—a fleeting dream, the substance on which they work out their nightmares. Now we have become a willed, consciously articulated movement into action. We have become more than a dream; we are a dream told and interpreted.

And so we harvest the sheaves of Yoseph’s first dream, and see them standing upright in the fields.  We were like dreamers, and though we plowed in sorrow and sowed bitter thorns, we are gathering in a harvest beyond Yoseph’s wildest dreams.

And the rest will be the stuff of future history.