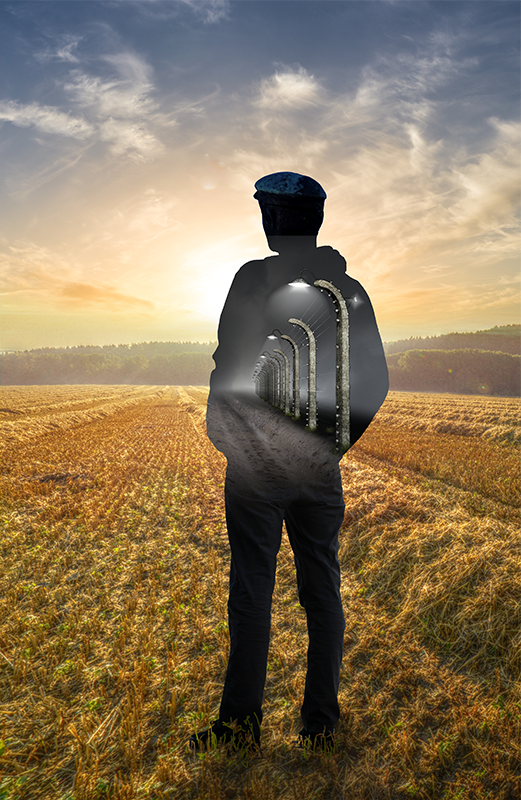 Ovadya ben Malka was born in 1926 in Saloniki, Greece. At the age of seventeen he was deported, together with his mother and younger sister, to Birkenau. His family was killed on arrival. His survival was to cost him dearly. The rest of his story is told in Returning. Below is an excerpt from his reminiscences, along with a brief correspondence with Masha, a fellow survivor.

It is strange how going back over the past sometimes leads to understanding of one’s motives long after the fact. Sometimes I look at what I did or didn’t do, and I want to go back in time and strangle that younger version of myself. But sometimes, I look back and think, he wasn’t such a bad sort, this Alex.

This was during my first week on the job. I picked a fight with a German guard in the krema. Well, I didn’t really pick a fight; I only provoked a beating. But I did it on purpose.

To give some background: the crematorium is built on two levels. The ground floor contains the furnace room and some other facilities; while below ground is the auskleideraum (undressing-room) and what they like to call the leichenkeller. This is a long room that can be completely sealed….

The lift that takes the corpses up to the furnace room is located in a kind of corridor or anteroom between the auskleideraum and the leichenkeller. This is one of the few places in the lager where German guards, as opposed to the usual Poles or Ukrainians, are on hand to supervise—or at least oversee—routine operations. They usually don’t get involved with things, though there are some officers who do. I don’t remember the ranks or the units; in my mind, they are all just “Deutscher”.

It had initially been decided that the “dentists” would work in the atrium near the lift while the clearing out was going on. Perhaps this was based on the assumption that the clearing out was the biggest bottleneck; however it turned out to be a very poor decision. Some weeks later it ended in an altercation—almost a fist-fight—between our kapo and some other supervisor, whose rank I’m unsure of—not a German at any rate. The SK members took the kapo’s part, and the dentists henceforth worked upstairs.

But this was before that was sorted out.

So picture the scene: all is chaos and there is a bottleneck in this little room as everyone tries to do his job. People trip over the living and the dead and tempers flare. At one point in all this, one of the workers drags his load out of the open door of the leichenkeller, past the waiting lift, and goes out of his way to run headlong into one of the uniformed Germans standing on the other side of the room. The blow is unexpected and knocks the guard back against the wall. His reaction is not at all unexpected; he drags the offending worker into the auskleideraum and beats him senseless.

Was this little altercation an accident? An attempted suicide? I’ve gone over this incident from the inside out countless times; there is a lesson in it beyond the obvious “be respectful of authority.” No, it was not an attempted suicide because, unlike anywhere else in that camp, here our team had a kind of protected status. Gone were the days of the mass liquidations; now they needed every experienced hand. So as an attempt at suicide, it was destined to fail; only people above a certain rank were allowed to kill us, though anyone could punish us.

The truth is that I provoked that beating in order to reinforce the barriers between me and the enemy. I had seen myself standing there side by side with this man in the auskleideraum, while my people undressed and prepared themselves for death, and something in me snapped. I couldn’t bear to live with myself like that—standing on the side of the Germans against my own. I couldn’t bear the thought that by serving them, I might seem to be on their side. After all, like them, I would remain alive at the end of the shift.

I needed to prove to myself—only to myself—that I was doing this under duress. I wanted to reinforce in my own mind the wall between master and slave, and put myself clearly and unmistakably—at least in my own mind—on the side of my own people.

And so I went out of my way to bump into this guy. And naturally, he did exactly what I expected him to do. He spent the next little while putting me in my place. And that was exactly what I wanted, to be put in my place—in order to demonstrate that my place was with my own people and not with the enemy.

I know this might not make sense, but there was a good deal of comfort in that beating. I think the ones that followed were easier to bear because I provoked that first one.

You see, Masha? On the outside, this was someone that I could probably have taken down in a fair fight without much trouble for either of us. But here, I was forbidden to lift a hand in my own defense. All I could do was lie there and take it. You see? I needed that reinforcement of the difference between him and me, to remove the stain of “collaborator” that threatened to seep into my soul.

So I had two or three cracked ribs to remind me with every breath for the next week or so. Within a few months, I was beyond such little acts of defiance. I couldn’t do that now. But it’s good to remember that I once could and that I once felt the need.

Anyway, Masha, I just wanted to explain. So you could see something in me worth saving.

Ovadya, I do see. And I don’t think I could love you the way I do if you were someone else, who had not been where you were. And maybe you wouldn’t love me at all either had I not gone through what I did. We would just see ourselves in each other and feel that we can’t help each other.

If I had to meet another brothel girl, I am not sure if it would be as healing for me. Maybe it would, in some ways. But there are things I feel for you that are healing, and I wouldn’t be able to feel that for a brothel girl. And if you had to meet another SK man, you wouldn’t see that person as quite so innocent as you see me. So you would miss out on that part of healing too. I think it is helping you find your own innocence.

Masha, I think I see what you mean. I can’t help but see you as innocent. But if we went through something similar then must I see myself as innocent in some sense as well?

Yes, even though the rest of your mind is still fighting with that idea and doesn’t find it easy to see yourself as innocent. I think that’s why my love for you is also important. It’s as if you can say to yourself, “Well, if Masha loves me and she’s innocent, then surely she must see something pure and good in me too?” And I’m learning the same sort of lesson.

Ovadya, when I first met you, this is what I felt, that you had the same sort of guilt as me. I could hardly believe that we could even speak about it, let alone understand each other. Sometimes even now, I can’t talk about any of it, because I don’t want to feel any of it. I still don’t really feel anything about what happened in the brothel. I just remember it and think, oh well, it happened. But I can’t feel anything about it.

It does not even seem wrong to me. It just seems that all people should expect this sort of thing and if it doesn’t happen they can be grateful. But it seems wrong to think that this is such an unusual thing and you should be outraged if it happens. Because it did happen.

But, Masha, it is wrong! Yes, it happened. But that doesn’t mean that it was not wrong. These things should continue to awaken our sense of outrage, because not to be outraged is to cease to be human. I will not surrender my humanity without a fight, even if I know I will lose that fight in the end.

Do you see? What happened to you was wrong and is not what anyone should expect out of life. It is not the norm. But if it is not to become the norm then we must preserve our sense of outrage and never come to accept it as the norm.