You are here: Home / The Jewish Year / On running a book club discussion during the Nine Days 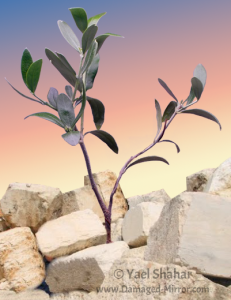 When Ya’qub ibn Yusuf of Olam Qatan Bookstore asked me to run a discussion on A Damaged Mirror during the Nine Days, the solemn period prior to Tisha b’Av, I was somewhat reluctant. The book is about healing from tragedy, more than about tragedy. True, it spares no details of the dilemmas and wrong choices of a young man forced to serve in the Sonderkommando. But the emphasis is on t’shuvah. What has t’shuvah and healing to do with Tisha b’Av?
And then I gave it some thought, and realized that it is appropriate after all. For if Tisha b’Av were solely about mourning, then we would be “over it” by now. With the Ingathering of the Exiles in full swing, Jerusalem rebuilt and teeming with Jewish life, a renaissance in Jewish education happening all around us…what need have we to mourn a loss that is gradually being healed?
But that’s not how communal memory works, particularly traumatic memory; it does not fade with time. This is not a bug; it’s a feature! It’s true that we tend to want to “heal” from the more difficult memories so that we can get on with our lives, and this is certainly a good thing. Life takes precedence over death.
At the same time, there are reasons why we need to remember. One reason is that we have something to learn from memory. The consequences of a bad decision are much more likely to be internalized if the memory is vivid and immediate.
Another reason is that we do not—and should not—want to “heal” from some memories. Tisha b’Av is an intentionally triggered “national flashback”. Any survivor will tell you that the anniversary of a traumatic event is the time when one is most likely to relive it. Rather than trying to “get over it”, we allow ourselves to acknowledge the loss. We acknowledge that there are some things that we should not just “get over”.
It’s true that life takes precedence over death, but that doesn’t mean that death and loss should be shoved under the carpet. Mourning deserves a place in our lives because loss is part of life. Sometimes the kindest thing we can do for ourselves is simply to allow ourselves the space to mourn.
Tisha b’Av is a day when we acknowledge that wrong decisions have consequences, that what is lost can never be regained. It is a day of honoring lost potential, so that we will learn that what is most precious is also that which is most fragile. And so, I find the quiet time of contemplation of the Nine Days to be uniquely fitting to sharing the memories, not only of loss, but of the hope of redemption.