You are here: Home / Havruta with a One-Eyed Cat / Sanhedrin Perek 3 – Grass roots vs. rule from above 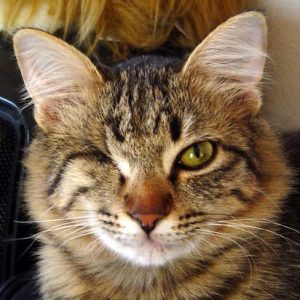 I ended up preparing for my advanced Talmud class with Pixel as Havruta. It might have been easier to study on my own, but she left me no choice; she sat on the arm of my chair and read over my shoulder.

“Pet the cat,” said Pixel. I shifted the heavy volume to free up my cat-petting hand.

“The litigants each choose a judge and then both together choose the third judge. This is the opinion of Rabbi Meir.”

Hmmm… But why would R’ Meir think that two people who can’t even agree on who owes how much to whom are suddenly going to agree on the third judge?

“Come on, Pixel! What does a cat know about judiciary matters?”

Pixel gave me one of those looks. “You’ll see. Letting the litigants decide who will judge their case leaves the way open to all sorts of problems…. What if the litigants choose a miscreant? What if they choose someone who is related to one of the litigants. That’s less likely to happen if the third judge gets chosen by the previous two judges.”

Gemara: “The sages rule that the two judges together choose the third judge”.

“See?” said Pixel. “Human beings aren’t competent. You have to legislate for the lowest common denominator. All this will be straightened out when Bertrum Thumbcat takes over the world… Pet the cat.”

“But wait a minute, Pixel. The two litigants each chose one of the first two judges. So there’s some concession to the grassroots level.”

Pixel was not impressed. “That’s just so human beings won’t feel too despondent and unworthy of petting cats.” She paused to lick a bit of fur back into place. “You see, Rabbi Meir was trying to legislate for an unrealistically ideal world. That’s why he’s always in the minority. And then there was that little matter of Elisha ben Abuya… Pet the cat.”

How can so much irreverence be packed into such a tiny body, not to mention smugness? “Pixel, stop dissing R’ Meir!  He was born over 2,000 years ago; you were born less than 10 years ago. And also, he’s Bruria’s husband. He outranks you. Besides, you’re a cat.”

“Does Bruria feed cats? Does she live on our street? No. She’s irrelevant. Pet the cat. NOW!”