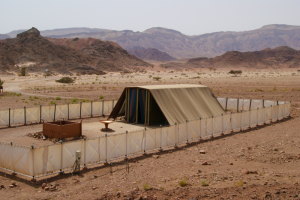 It’s been noted that the Mishkan which the Israelites were commanded to build in the desert bears a striking resemblance to the royal military tent of Pharaoh Ramses II. Further, the Ark of the Covenant appears to have been modeled after an Egyptian sacred boat. What are we to make of these parallels? Are they merely a matter of historical curiosity or is there a deeper meaning?