You are here: Home / Hashkafah & Jewish Thought / The Response to a Blessing and the Hidden Lessons of the Kaddish 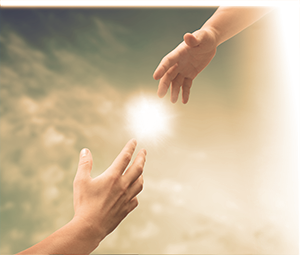 “The trouble with our era,” said Rav Ish-Shalom as he placed our books on the table, “is that we have trouble really listening. We want everything in the form of short and simple messages, when really a whole story is needed to get across the true meaning of things.”

He moved a stack of papers aside to make room for coffee cups. “A lot has been written about our short attention spans,” he said, “but it didn’t start with the internet and twitter. Our attention spans have been growing shorter for centuries.”

I sat down and found my place in the text we were currently studying, Massechet Ta’anit, wondering where he was going with this. My teacher rarely started a conversation idly.

“Take the Kaddish,” he said. “We say, ‘Yitgadal v’Yitkadash Shmei Rabbah’ and then we stop and wait for the reply. But we haven’t said anything yet! Even if we continue to the next point, we still haven’t said what needs to be said.”

I mulled it over. The Kaddish is one of the central expressions of faith in our liturgy. It is recited in the original Aramaic because at the time it was composed, Aramaic was the vernacular.

“How did the Kaddish come to be associated with mourners?” asked Rav Ish-Shalom.

A number of possible answers came to mind as he paused to sip his coffee. “Because we need to affirm our trust in God more when we have lost a loved one,” I said. “By reciting it, and having the community respond, we feel strengthened and less alone with our grief.”

My teacher nodded. “Yes, that’s one answer. A reaffirmation of faith at a time when we are most in need of it, in the face of terrible loss. But there is another even deeper reason. This is something that I’ve never seen anywhere, and I can’t understand why not. I’ve never had time to write it up.”

“Aha!” I said, “Another one for your website!” I knew that would call forth the usual little dance of evasion. I wasn’t disappointed. But at least I had tried. But I was also very much aware that I would need to remember, word-for-word, what came next.

“When you do someone a favor,” said Rav Ish-Shalom, “what does the person whom you have helped say to you? Usually it will be ”May you merit mitzvot!’ Ever heard that expression?”

“Of course! Often when I pick up a hitchhiker, he or she will give such a parting blessing.”

“Indeed!” said Rav Ish-Shalom. “And what is the traditional response?”

I shook my head.

“May you merit ‘l’asot’ (to do)! Now, there is a tradition that if someone offers you a blessing, you should respond with an even greater blessing. If someone blesses you with ‘may you merit mitzvot!’ how is ‘May you merit to do!’ a bigger blessing?”

I thought about it. “The first blessing is merely the potential of doing mitzvot. The second is greater because it says in essence, may you bring the potential into actuality! May you actually do mitzvot!”

That got a laugh. Then, in a more serious tone, he said, “But I think the response we commonly give is not actually the correct reading. To my mind it should read, not ‘Tizkeh la’asot!’ but ‘Tizkeh leha’asot!'”

“Indeed! Our Sages considered it a greater thing to cause others to do a mitzvah even than to do one yourself. This has generally been applied to the giving of charity. Those who go around collecting and distributing charity have greater merit even than those who give. Why? Because without the collectors, the givers would not give! So rather than returning the blessing, Tizkeh l’asot, an even greater blessing would be Tizkeh le’ha’asot!”

“So next time you pick up a hitchhiker, you can pass along this teaching in my name,” said Rav Ish-Shalom. It was only the second time he’d given me such a “mesorah” and I assured him that I would do so.

“It makes sense,” I said. “It’s the converse of the Rambam’s assertion that causing another to do wrong is ‘a great wrong’. Whether good or bad, once we cause something to happen we never know where it will end; the ripples continue ever outward. It’s like lighting a fire at the edge of ones property and just letting it go…”

Rav Ish-Shalom nodded. “But now, coming back to Kaddish, what is it all about?” he asked. “We say: ‘May His great name be fully known in your time.’ Think of a mourner, one who has lost a beloved family member. He or she is sunk deep in loss, and can think only of the loss of potential, the loss of promise. One he loved has lived and died without ever seeing that long-awaited day when God’s name will be known by all. And so the mourner says to the community, ‘May it be fulfilled at least in your time…even if it was not fulfilled in the lifetime of the deceased’. It is an expression of despondency, of awareness of mortality, of limits.

“And what does the community answer? ‘No! May it be fulfilled in all times, for ever and ever!’ To the mourner’s blessing, they respond with an even greater blessing: May every generation live to see it!’ The mourner understands the limits on life; the community, which is immortal, sees the bigger picture!

I thought of the implications. It would seem that the Kaddish teaches us two things. First, it teaches us to return a blessing with a greater one. What a wealth of understanding there is in this if taken to its ultimate extreme! We are given life, a blessing that it would seem impossible to better. And yet we do all we can to return an even greater blessing, in the form of what we become. Secondly, we are taught to set our goals high—higher even than the reach of any one generation. What we hope for hasn’t come about in our generation? Naturally we hope that it will happen in the next generation. And yet, our community—the timeless, immortal embodiment of Torah—reminds us: it is happening even now! It is all around us, in ever generation. From the standpoint of eternity, there can be no doubt: it is happening!

The next response in the Kaddish is a recognition of this.  To the community’s “May His great name be blessed for all eternity” the mourner responds by saying that His great name is beyond any praise that mortal tongue can utter. In other words, it is timeless because outside of time altogether—beyond the grasp of the human mind.

And yet, somehow we know. The reminder of that knowledge may be the greatest blessing anyone can wish upon another.