You are here: Home / Parashat HaShavua / VaYechi: The end of the beginning 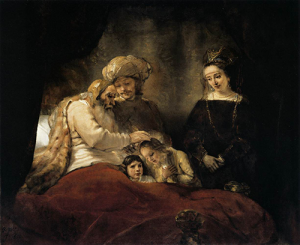 And so it is to this day; on Erev Shabbat, it is customary for fathers to bless their sons with this blessing. But why? Why do we ask that God make them like Ephraim and like Menashe?  Why not like Yehuda, from whom Israel’s kings were descended? Or like Levy, from whom the priests are descended?  What is so special about Yoseph’s sons?

Go back two parshiot to the birth of Yoseph’s two sons. Yoseph had become the prototype of the successful assimilated Jew.  He had recently risen to a position of power in Egypt and Pharoah had found a high-born Egyptian wife for him. At the time, Yoseph had no reason to think he would ever see his birth family again, and apparently little desire to go looking for them. After all, they had sold him into slavery. Even his father’s role in it was unclear.

Between past and future

The birth of children gives us a reason to look to the future, and that is what Yoseph did; He named his first born Menashe as a sign that “God has caused me to forget all my toil and all my father’s house,” and Ephraim, for “God has made me fruitful in the land of my affliction.”

Yoseph was determined to turn his back on his heritage and embrace his new life in Egypt, and given the circumstances, he could be forgiven for doing so. And yet, it was not to be. The dramatic appearance of his brothers, their reaction to the test he set up for them, and the reunification with his father—all of it served to bring Yoseph back into his inheritance, which despite himself, he had never really abandoned.

Yoseph’s sons, meanwhile, would have been raised as Egyptian noblemen, given an Egyptian education, and grown up rubbing shoulders with the upper crust of Egyptian society. And yet, at the end of Ya’akov’s life, he takes Yoseph’s sons as his own, giving them an inheritance with his own sons.

Was this just simply a savvy political ploy—a way to marry the fortunes of his own sons to that of the next generation of Egypt’s leaders? Or was there a deeper message here?

The test of living

It has become something of a truism that the real answer to the question “Who is a Jew?” is simple: “You are Jewish if your grandchildren are Jewish.” Of all the tests we have to face as a people, none are as difficult as the test of success. More Jews have been lost to assimilation in those countries that welcome Jews than have been lost to pogroms, massacres, and genocide in hostile lands.

Of all of Ya’akov’s descendants, only Yoseph had faced the test of success in a foreign culture. Only he had lived in a secular society and maintained his cultural identity. Perhaps, with the wisdom of old age, Ya’akov saw that Yoseph’s inoculation to the pleasures of Egyptian society had immunized his sons as well; they too would resist the pressures of assimilation and remain true to their heritage.

Only with the assurance that we can live among strangers and remain true to ourselves can we grow from a family to a nation. For this reason, Yoseph’s sons, Menashe and Ephraim, represent the future of the Jewish nation.

And this is what we wish upon our own children: that they rise to the challenge of being a light to the nations—living and working in the broader world—but never losing the special connection to their heritage and mission.