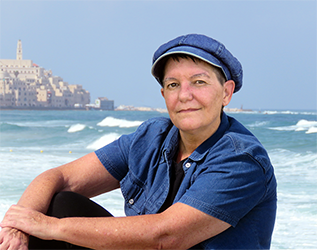 Yael Shahar is the author of Returning, a novelization of a remarkable true story of spiritual resilience in the wake of trauma.

She was born in the U.S., but moved to Israel on her own as a teenager. She has trained horses, taught physics, and spent an inordinate amount of time opening doors for cats. She served as a police sniper in Israel’s border guard, and in the reserves in a hostage rescue unit.

When she isn’t writing, Yael is either gardening or learning Talmud, or occasionally roaming the garden with a UV flashlight, looking for scorpions, “just so I’ll know how many are out there”. She lives in Israel with her husband and too many cats.

You can find her at  www.yaelshahar.com, as well as on the Times of Israel blogs and the Haaretz Jewish World.